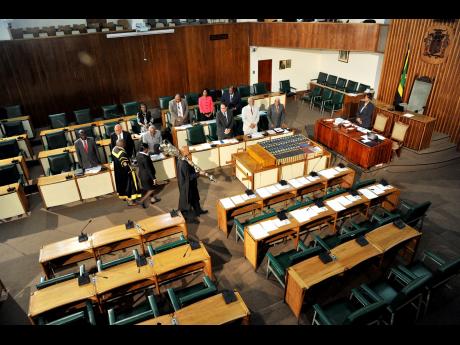 Norman Grindley
The empty opposition benches (right) at the opening of last Friday’s sitting of the Senate as both sides battle, stalling the debate on the CCJ bills.
1
2

The three bills necessary to establish the Caribbean Court of Justice (CCJ) as Jamaica's final court of appeal are being debated in the Senate and, as expected, the debate threatens to become ensnared in political shenanigans of half-truths, sleight of hands, misplaced letters, bathroom strolls ... sorry ... lunchroom strolls, video surveillance and errant parliamentary marshals.

While these shenanigans continue, much of the working class of Jamaicans continue about their day-to-day lives without an understanding of the issues involved or the necessity even for a debate.

The aim of today's column is to provide readers with 13 must-know facts about the Privy Council, the CCJ and the debate to replace the former with the latter. With a greater appreciation of the issues will hopefully come greater interest and participation in the debate now taking place in the Senate.

2. The jurisdiction of the Privy Council originated back in the period of the Norman Conquest (11th century) with the premise that:

"The King is the fountain of all justice throughout his Dominions, and exercises jurisdiction in his Council, which act in an advisory capacity to the Crown."

Through the Privy Council, "subjects" throughout the British Empire who had grievances against the administration of justice could submit their petitions to their King.

3. Historically, the Judicial Committee of the Privy Council heard appeals from all the territories England had colonised, among others.

4. Post-independence from British rule, many former colonies abolished appeals to the Privy Council, opting rather to establish their own final court of appeal to sit in judgment of their wrongs rather than to continue to defer to a final court of appeal set-up by their former coloniser in their former coloniser's homeland. Australia, Canada, Grenada, Guyana, Hong Kong, Singapore, India, South Africa, New Zealand, Pakistan are just a few former colonies which, after gaining independence from British rule, abolished appeals to the British Privy Council.

5. Jamaica has been formally independent of English rule since 1962 - some 53 years now - yet continues to appeal to the British Privy Council.

7. The CCJ currently sits in Trinidad and Tobago; however, it is an itinerant court, which means that it can travel to and operate in any contracting country (the case of Shanique Myrie, where the court travelled to both Barbados and Jamaica for the hearing, provides a case in point).

8. The vestiges of the concept of a regional court has been traced back as far as 1901, to an editorial in The Gleaner which bemoaned the lack of local representation on the Privy Council and consequently it being out of touch with the culture of the region:

"Thinking men are not adverse to a great final Court of Appeal for the empire but they believe that the Judicial Committee has served its turn and it now out of joint with the conditions of the times ... . The members of the Committee are the highest legal authorities in the land yet it is impossible for them to transport themselves completely into the circumstances and systems which rule in some of the colonies and dependencies."

10. The three bills currently being debated in the Senate were actually already passed into law in September 2004 (some 11 years ago); however, the bills were passed by simple majority (as distinct from a two-thirds majority) in both houses and their legality was challenged in the courts on the basis that the process bringing them into law was flawed. The matter was pursued all the way to the Privy Council.

11. The Privy Council concluded that the process employed to replace them (the Privy Council) with the CCJ, had been, "impliedly", if not "expressly", flawed and, as such, should be redone.

12. As a result of the 2004 Privy Council ruling, the issue is back before the Houses of Parliament in Jamaica for a new vote to be taken on the matter. Now at least a two-thirds majority must be obtained in both houses for the change to the CCJ to become a reality. The Lower House of Parliament has already voted with the necessary majority in favour of the change. The Government used its overwhelming majority in that House to push through the necessary bills. No opposition member voted in favour of the bills.

13. The current debate in the Senate is aimed at getting a majority of senators, at least 14, to vote in favour of replacing the Privy Council with the CCJ. This is because there are 13 government senators and eight opposition senators. As such, to obtain a two-thirds majority vote in the Senate, there must be support from both sides of the divide. The Government's majority in the Senate will not be sufficient. No one side can do it alone.

- Shena Stubbs-Gibson is an attorney at law and legal commentator. Send feedback to: