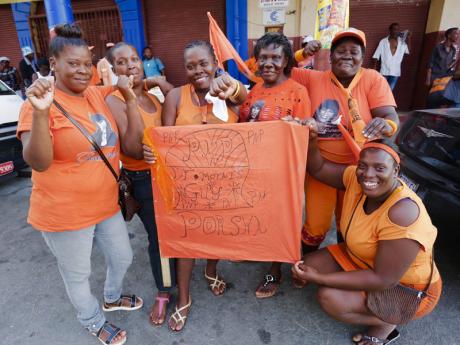 Ian Allen
Comrades posing for the cameras in Annotto Bay, St Mary ahead of the PNP mass rally.

Buses loaded with throngs of orange-clad supporters have poured into the seaside town of Annotto Bay, St Mary for the People’s National Party (PNP)  mass rally.

For the second week straight Sunday, comrades are out in their numbers as they join in the preparation for an impending election.

As it was in Westmoreland last week, the general theme of the rally is expected to be 'Continuing the progress.'

This afternoon there were showers in sections of St Mary but Annotto Bay remained dry.

Blue skies and a smattering of clouds facilitated the modernised town-crier travelling in a state-of-the-art truck to herald the arrival of PNP President, Portia Simpson Miller, and other speakers.

PNP candidates from Region Two, comprising the parishes of Portland, St Thomas and St Mary are expected to address supporters along with party bigwigs.

The Annotto Bay leg is the second in the multi-parish Road Tour of the governing party.