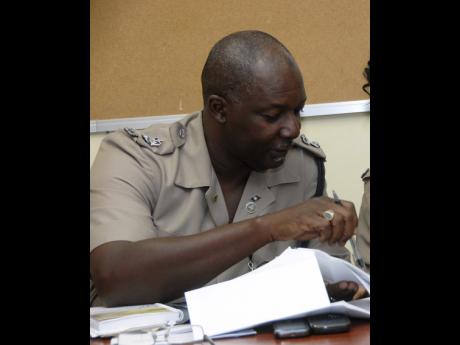 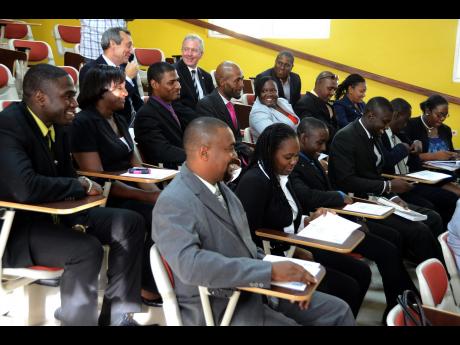 File
Members of the graduating class during the closing ceremony for the kidnapping, negotiation and extortion training Course in 2014.
1
2

The Counter-Terrorism and Organised Crime (CTOC) Division and the Police Area Five personnel are getting pats on the back following the recent conviction of ex-cop Alpheus Wade for the 2011 kidnapping of businessman Marc Frankson.

A joint team from CTOC and Area Five, which specialises in kidnap-rescue operations, successfully saw the case through from hostage negotiation to conviction.

A JCF source told The Sunday Gleaner that the team has also featured in another three high-profile cases involving kidnapping and murder, where the perpetrators were brought to justice as a result of deep undercover work.

"A lot of people wouldn't know, but personnel from this same team, before it was formalised in 2005, played a major role in the 2004 convictions of Carl McHargh and Brian Rankine for the shooting deaths of Jamaica Football Federation President Horace Burrell's son, Tahj Burrell and Jason Eldridge," said the high-ranking cop, who asked not to be named.

McHargh and Rankine were sentenced to hang in 2004 for the double murder committed on the night of July 25, 1999, at Northside Plaza in Liguanea, St Andrew.

"At the start of 2000, there seemed to have been a spike in abductions and we were determined not to have Jamaican criminals start patterning their counterparts in Trinidad and Tobago and South America, where kidnappings are rife," said the JCF source.

He said the joint team was formalised in 2005, after its members negotiated the safe return of socialite Christine English, who was abducted outside her home in Gordon Town, St Andrew, in 2004, and a $6-million ransom demanded for her release.

The ransom was later dropped to $2.5 million during negotiations. English was released three days after. One of the alleged kidnappers was later arrested during a police operation in the Corporate Area.

During the trial, it was revealed that the money for the release of English was delivered to the accused in the woodlands of Peter's Rock, St Andrew, by a district constable posing as the abducted woman's son.

Recognising the team's work in similar situations that year, then Security Minister Dr Peter Phillips told Parliament that the Government had sought and received a commitment from Scotland Yard to assist with specialised training for the unit.

The Sunday Gleaner's source said the team had also played a major role in the safe return of a mother and daughter, who were abducted from the Mavis Bank area of rural St Andrew, in May 2005.

The mother and daughter were rescued unharmed, the alleged kidnapper collared on Slipe Road, St Andrew, and $200,000 in ransom money recovered.

The team's formal training was realised in 2006 when Les Green, then assistant commissioner in charge of serious and organised crimes, announced a three-week hostage-negotiator course in Orlando, Florida, for some of its members.

"It is important to not only preserve the life of the kidnapped, but also the kidnapper," Green said then, explaining the role of hostage negotiators.

He argued that it was important to have trained police personnel to handle delicate situations such as kidnappings.

Last week, Senior Superintendent Colin Pinnock of CTOC told our news team that setting up the team and training its members years ago, paid off in the conviction of Wade and safe return of Frankson for whom a US$500,000 ransom, later reduced to US$200,000, was demanded.

"What has happened is that the training has made the men more equipped at rescuing kidnapped persons," Pinnock told The Sunday Gleaner.

In the case of Wade, who is to be sentenced this month for the 2011 kidnapping of Frankson, the specialised team was swiftly mobilised and McKay given US$91,000.

He testified in court how he began negotiating with the kidnappers by phone in Portmore, St Catherine.

According to Pinnock, the swift deployment of the joint team and skilful negotiations with Frankson's abductors were key to the businessman's safe return - lessons learnt from the 2000 kidnapping and murder of gas station operator Sylvia Edwards.

Sleepless | A wild and restless night