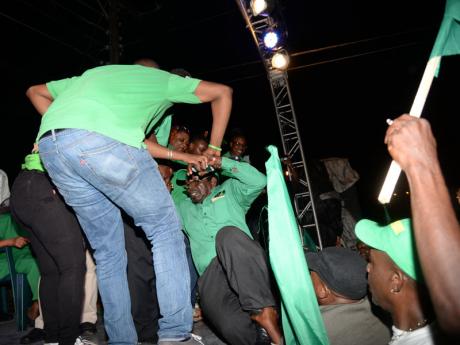 Jermaine Barnaby
North Central Clarendon MP Pearnel Charles being lifted on to the stage for the JLP mass rally in May Pen, Clarendon. 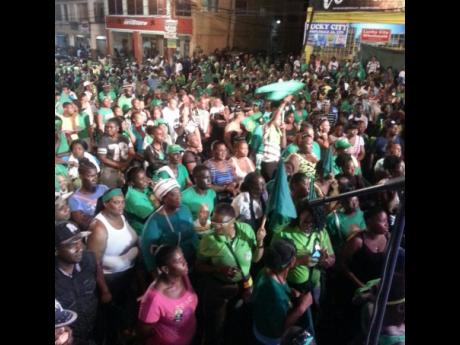 Livern Barrett
A section of the crowd of Labourites gathered in May Pen, Clarendon for a JLP mass meeting Sunday. 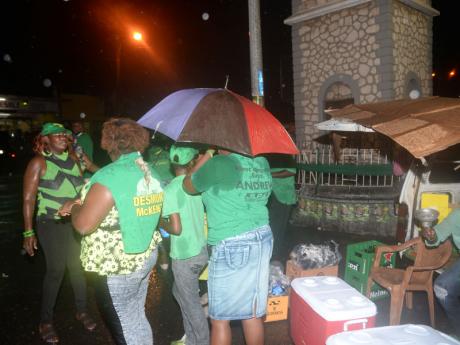 Jermaine Barnaby
Labourited shelter from the rain before the start of the JLP mass rally in May Pen, Clarendon. 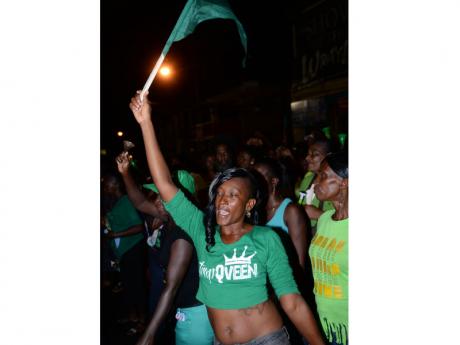 Jermaine Barnaby
A flag-waving Jamaica Labour Party supporter moves to the beat of the music at the start of the JLP mass rally in May Pen, Clarendon.
1
2
3
4

The chairman of the Jamaica Labour Party's Area Council Three Winston Maragh has revealed that the party is targetting the Central Manchester constituency held by National Security Minister Peter Bunting.

The made the revelation as hundreds of JLP supporters gathered in May Pen Square for a JLP mass meeting, which Maragh said is being used as a spring board for the launch of the party's bid to wrest control of a number of constituencies in Clarendon, Manchester and St Ann.

The JLP now controls 5 of the 14 constituencies in the three parishes.

"We decided to bring some people into May Pen tonight to galvanise the support that we have," Maragh explained as the meeting got under way.

"We are working on central (Manchester). We know it looks tough, but based on the results we got in the last election with Danville Walker we believe we can pull it off," he added.

JLP leader Andrew Holness and other party stalwarts are down to address the meeting.