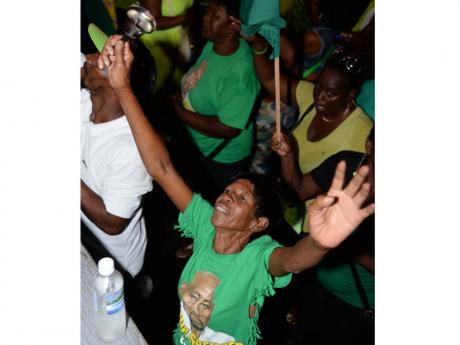 Jermaine Barnaby
A Jamaica Labour Party supporter wearing a blouse with the image of former health minister Ruddy Spencer raises her hands to the skies at a JLP mass rally in May Pen, Clarendon.

Former Health Minister Rudyard Spencer has appealed to mothers not to forget the deaths of 19 babies as a result of a bacterial infection outbreak at two of Jamaica's public hospitals.

The Health Minister Dr Fenton Ferguson has been under pressure since he revealed last month that he learned about the dead babies scandal on October 16, the same day it was reported on Nationwide radio.

The infection had been detected at the University Hospital of the West Indies (UHWI) almost four months earlier.

In the meantime, Spencer has raised doubts about Ferguson's assertion that he was never informed about the outbreak at the UHWI and the Cornwall Regional Hospital until the day it was reported on the media.

Later, Central St Catherine MP, Olivia ‘Babsy’ Grange had the women in the crowd lifting their hands to the skies as she made the call for them to show empathy and solidarity to all the mothers who lost their babies.

As the soulful sounds of Grace Thrillers' 'Can’t Even Walk' played in the background, Grange invited some of the women on the stage to stand with her even as she criticised the hospitals.

"Send a message to this government that and let them know that we weep for those mothers and yes the babies were real!" she said to loud cheers in apparent hit at Ferguson who misspoke in Parliament saying the infants were not babies in the real sense.

READ: Ferguson seeks to clarify 'not babies in the real sense' comment

Grange expressed sadness and total unhappiness at the conditions of the hospitals that allowed the babies to die.

“Let’s pray for this country that we will get deliverance” with the assurance that the JLP will be coming with that solution.