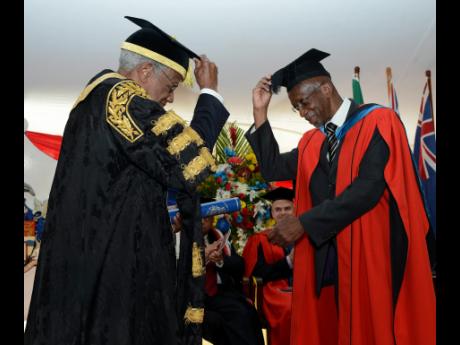 Ian Allen
Chancellor Professor Sir George Alleyne (left) and Burchell Whiteman tip their hats after the latter was conferred with an honorary degree of Doctor of Laws at the University of the West Indies on Saturday. 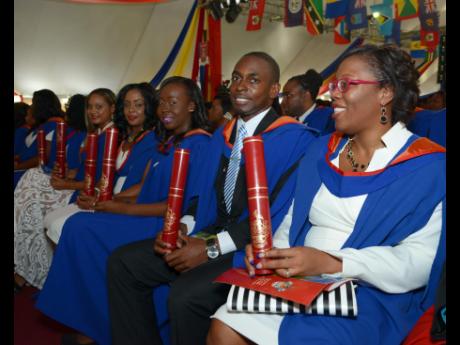 Ian Allen
Members of the University of the West Indies Class of 2015 during their graduation ceremony at the Mona campus on Saturday.
1
2

Former Jamaican High Commissioner to England Burchell Whiteman has called on citizens to embrace regionalism as an avenue to bolster development.

Whiteman, who was conferred with the Doctor Laws honorary degree by the University of the West Indies (UWI), said that regional unity and integration are critical factors to the advancement of the Caribbean.

"I will say nothing about CCJ, but what I will say is that island pride and patriotism are not in conflict with sustainable integration, and I will encourage you to find a way to make the region add value for national development," Whiteman said.

The former education minister was addressing graduands at one of the university's four graduation ceremonies on Saturday.

UWI is a regional tertiary institution.

"I certainly would encourage all of us to recognise the opportunities and benefits of a more strategic cooperation as Caribbean territories and Caribbean nationals," Whiteman declared.

The Jamaican Government has been pushing to have the Caribbean Court of Justice (CCJ) replace the Judicial Committee of the Privy Council as the country's final court of appeal. However, the parliamentary opposition says that the attempt to embrace the CCJ represents chasing after "a fleeting and elusive dream called integration".

"The people spoke on this matter 54 years ago and decided against sharing our sovereignty in any federal arrangement," Holness said in reference to the 1961 referendum on whether Jamaica should remain in the Federation.

On Saturday, seemingly mindful of the polarised discussions on the CCJ becoming Jamaica's final appellate court, Whiteman, a former cabinet minister, chose not to speak much about the matter. He instead confined his contribution to a call for policymakers to make it a priority to invest in tertiary education, noting that it is a significant contributor to the country's success.

"We have to be a learning society. Knowledge is constantly changing, and we have to avail ourselves to be equipped with information. Gone are the days when college and university education were seen as tools for the privileged minority. The fact is that societies and nations that fail to maximise and optimise the access to, and quality of, higher education are doomed to realise any sort of social and economic development," said Whiteman, a former education minister.

Poet Laureate Professor Mervyn Morris was also conferred with an honorary degree, and, so too, was Professor Godfrey Palmer of the Heriot-Watt University in Edinburgh in Scotland.

More than 2,000 students are graduating from the UWI, Mona, this weekend.