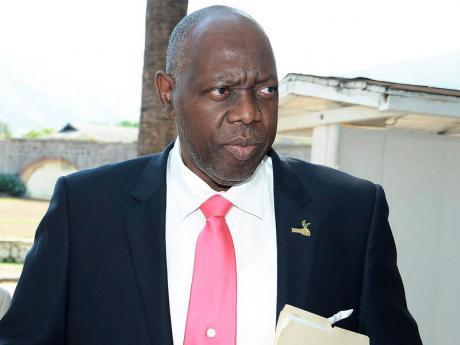 File Photo
In September, Dr Ferguson announced that the full audit would be withheld and instead released a list containing eight findings which pointed to several weaknesses.

The Gleaner/Power 106 News Centre understands that the Cabinet has asked Health Minister Dr Fenton Ferguson to review his ministry's decision to suppress an audit into the public healthcare system.

In September, Dr Ferguson announced that the full audit would be withheld and instead released a list containing eight findings which pointed to several weaknesses.

More in this report from Jovan Johnson.

Public demands for the release of the audit have been growing especially after the Jamaica Labour Party released on Sunday, excerpts it says suggest that the health ministry knew of the ongoing deadly infectious outbreak at one of the affected hospitals earlier than it has reported.

According to the document obtained by our News Centre, the day the audit team visited the Cornwall Regional Hospital in July, an outbreak of the bacteria was already taking place.

Dr Ferguson has said he learnt of the outbreak at Cornwall Regional on October 12 and at the University Hospital of the West Indies on October 16.

A senior government official told our news centre last night that in light of the latest developments, it has been suggested that the health ministry reviews its position on the release of the audit.

Our news centre also understands that senior members of the Portia Simpson Miller administration had disagreed with the initial decision to withhold the audit.

Ferguson had argued that releasing the full report would lead to public prejudices against some health institutions.

Nineteen babies have died in the outbreak.