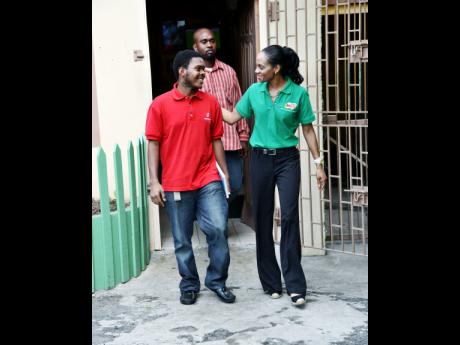 Ian Allen
Chadai Fagan (left), leaving the Penthouse Studios with Shawna Kidd, corporate communications and community relations manager at Nestle, after recording his first single courtesy of Nestle with assistance from Paul Christie, one of the engineers who worked on the project.

Over the years, Tameka Singh has listened to her little brother sing his heart out as he strums away on his guitar. Even as he practised in the comfort of the family home, she saw his aptitude for greatness and felt the need to do something to expose his talent.

Singh grabbed the opportunity to submit an entry in the Nestle As You Wish Promotion, and as luck would have it, her entry was among those chosen. Her request was to have her brother Chadai Fagan receive voice training and an opportunity to record one of his original songs at a recording studio.

Fagan not only received the chance to access voice training but was also given the opportunity to do a recording session at Jamaica's Penthouse Studio. "When I heard I would be going to Penthouse Studios I had butterflies right away. At the gate, I became very nervous. The studio is way different from singing at home," Fagan said.

According to Fagan, "I really want a chance at a career in music and this is like a dream come through. I prayed about it and I believed, and Nestle made this happen for me," Fagan said.

Kevino 'Bunu' Elliott, one of the engineers who assisted Fagan during the production, said he delivered well and didn't take long to do the recording. "It was surprisingly good for his first time in a recording studio. It is a very nice song that needs just a little more production from our side," Elliott said.

Paul Christie, another engineer who worked on Fagan's debut project, said based on his aptitude and enthusiasm towards his craft, he should continue to develop his talent and "keep the passion for the music".

Included on the wish list was also an opportunity to meet reggae singer and songwriter Christopher Martin. This wish was also

Shawna Kidd, corporate communications and corporate relations manager at Nestle, said that with over 200 applicants, they were only able to grant wishes to those who were in need and those in whose lives they could make a significant difference.