Give the people land – Justice Robinson 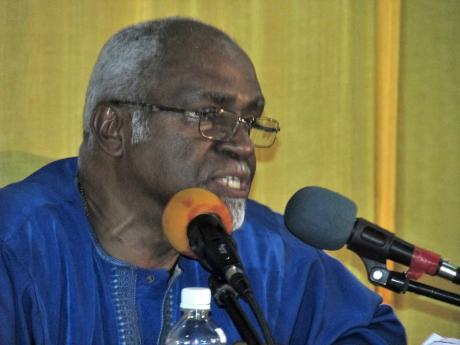 Justice Patrick Robinson, the first Jamaican to sit on the International Court of Justice, flew from The Hague in The Netherlands to speak at the 11th Paul Bogle and the Martyrs Lecture held on Thursday, November 29, in Morant Bay, St Thomas, under the theme: 'Don't pay the fine, Appeal Embracing the broader justice for which Paul Bogle fought and died'.

It was based on an utterance in the Morant Bay Court on October 7, 1865, when a cousin of Paul Bogle was fined because his horse allegedly trespassed on an estate. Bogle told him not to pay the fine, but to appeal. For this, a warrant was issued for Bogle's arrest.

Landlessness was one of the challenges black people faced during the immediate post-Emancipation period, and psychologically, they were not totally free because total freedom was tied to ownership of land. So, the newly freed had to pay rent, and were heavily taxed for their land, and animals, etc. Many were forced to live on estates to avoid paying rent.

In addition to their landlessness, black people earned low wages, and it was the practice of some planters to retain a week's wage to ensure that workers would return to the estates to work. There was also the practice of owners retaining wages for various breaches and offences. The injustice led to squatting, for which squatters were arrested and invariably found guilty, and fined.

It was against this backdrop that Justice Robinson spoke on the issue of landlessness, one of his subtopics of the implications of the Morant Bay Uprising for modern-day Jamaica. He said black people were imposed upon for 27 years after Emancipation by an oppressive regime. They were frustrated and desperate.

Now, 150 years after, Justice Robinson is maintaining that it is the responsibility of the Government and people of Jamaica to ensure that every Jamaican live in the best economic condition available and sustained by government.

About the issue of landlessness, he said, "We should be ashamed that some of our brothers and sisters have to squat on lands. Squatting is a horrible throwback to our colonial past ... and every effort must be made to eliminate it by providing for Jamaicans access to housing as a basic human right."

Justice Robinson said there are several organisations concerned with providing adequate housing for poor people. These include the International Covenant on Economic, Social and Cultural Rights to which Jamaica is a partner.

"And I find it surprising that our Charter of Fundamental Human Rights ... does not contain a provision for the right to housing ... ," a disappointed Justice Robinson said.

In terms of housing solutions, he said the National Housing Trust, established in 1976, is a good foundation on which to build. "We must work for the availability of and access to housing for poor Jamaicans using established public sector agencies or partnerships between public and private sector housing development."

Justice Robinson then reflected on the land problem that Paul Bogle and his followers faced, and said, "I say that we owe it to them to ensure that there are facilities for Jamaicans to acquire land for agriculture and other purposes." He wants the Land Administration and Management Programme to help people to obtain titles "expeditiously" at a reduced cost.

He said although the land needs of modern-day Jamaican differ significantly from the era of Paul Bogle and his followers, "there is still a fairly large body of Jamaicans who depend on land for their livelihood, and who do not have enough land. In that sense landlessness regrettably is still with us."

One solution to the issue of landlessness that Justice Robinson is proposing is that people who have been occupying lands for very long periods of time must be given legal ownership of such lands.