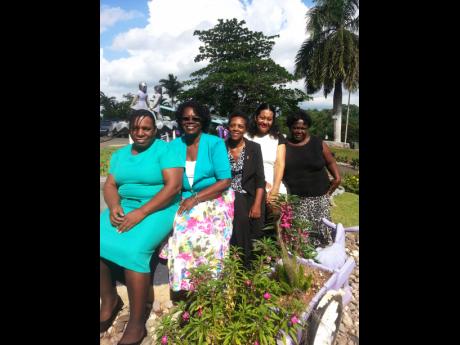 True success is not solely achieved through an individual's achievements; rather, it is dependent on the lives that are transformed as a result of the time invested and the giving of selfless service.

Call it the strength of a woman or female power, it may still not give justice to five retirees of the Bishop Gibson High School who were instrumental in helping to make the institution what it is today and have been honoured by the school for their contribution to nation building.

Maureen Paige spent 15 years of her life as the school's librarian. She transformed what was merely a room with some books into a structured facility that enhanced the student-learning process.

The mother of four girls admitted that the environment initially took some getting used to, but it eventually changed her life forever.

Even after retirement, Paige volunteers in the educational system and is highly involved in community and church. She is currently secretary of the school board.

It is never an easy task battling an illness while working, but with a smile on her face and the support of her colleagues and her son, retiree Rosalee Fletcher has done it all.

The justice of the peace and former clerical assistant who considers herself shy, explained that she has always had a passion for children, which enabled her to carry out her job well.

"I am a child at heart and I really love children. I will always go above and beyond for them, and my time here at Bishop was one I will never regret," she told Rural Xpress.

Having fought breast cancer during her tenure, Fletcher, who gave 28 years to the institution, believes it was the bond between staff that kept her going.

"My colleagues prayed me up continuously. I knew they really cared for me and, as a result, our bond grew stronger. I believed wholeheartedly in doing common things uncommonly and autographing my work with excellence, and here I am today," she said.

It is with joy that the Bishop Gibson family salutes former auxiliary member Ivett Hall, as it was with joy that she served and nourished the members of the school.

Hall spent 10 years with the high-school family and was appreciated for her work ethic and professionalism. She was instrumental in preparing all that was needed for the school-feeding programme and took pride in having children express their love for her.

She went beyond the call of duty almost everyday, ensuring that she was the first to reach campus, and sometimes the last to leave.

In addition to advancing the school's art programme, Brooks was president of the Manchester Chapter of Guidance Counsellors, ensuring first and second placement for the Parent Month award in the central region and nationally, she acted as vice-principal, she began the Planeteers Club, she launched prefect training seminars, she was awarded second in the island for performance as a counsellor, she began the school's feeding programme for needy students, coordinated fundraising events and started the drive Purple Pride, Purple Power, Purple Purpose, which is aimed at embracing the school colour and the values of the girls.

The biological mother of one up to today still caters to the needs of several other children, and seeks scholarships for them to continue their education.

Serving the longest, for more than 35 years, retired English language, English literature and Spanish teacher Marcia Chai-Ming had an infectious personality that the students and those who met her treasured.

She not only educated, but provided for and empowered students, raising their self-esteem and helping them to become movers and shakers in society. She was also former head of department, acting vice-president, form supervisor and PTA secretary.

Having served and served well, the women are pleased with the acknowledgement of their efforts.