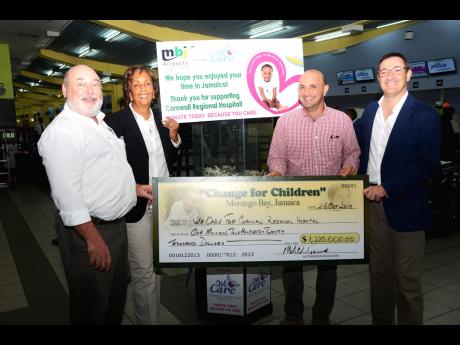 We Care for Cornwall Regional Foundation (CRF), the Scouts Association of Jamaica, and the Caribbean Christian Centre for the Deaf are the recipients of $2.4 million in donations from MBJ Airports Limited

The money, raised via the airport's Change for Children initiative, was handed over in a special ceremony on Monday at the Sangster International Airport in Montego Bay, St James.

This is the second disburse-ment since the units were placed in the airport facility in 2013.

"The unit has been cleared on three occasions post-installation, and to ensure transparency of the process, MBJ assigns an agent to oversee the emptying of the receptacles, the counting and converting of the money," Byfield said.

The clearing is done by airport foreign-exchange concessionaire, Global Exchange.

The brainchild of retired financial consultant, Richard Lackowitz, a regular visitor to the island and his friend, Montego Bay businessman, Mark Kerr Jarrett, the primary focus of Change for Children is to assist children in need.

"The initiative to date has grossed approximately $2.6 million," revealed Kerr Jarrett, adding that going forward, MBJ has decided to donate 50 per cent of the money collected to the We Care Foundation.

"We Care for CRH is a very good charity, they are making a difference to health care in western Jamaica," Byfield inserted, explaining that other charities may submit projects to MBJ, which will be considered internally.

More than 200 students, all with hearing impairment, at the Caribbean Christian Centre for the Deaf will benefit from the venture, said the school's managing director, Donville Jones.

Some four centres are located in Jamaica, one in Cassia Park, Kingston, Granville, St James, and Knockpatrick and Shooter's Hill in Manchester.

The donation also comes at a critical time for the Scouts Association of Jamaica, owing to the fact, that organisation has been fighting to keep its doors open to accommodate some 8,000 members across the island.

"We don't have any money, and as a result, a number of our programmes have to be cancelled," Albert Ferguson, assistant chief commissioner with responsibility for communications told Rural Xpress.

In addition to training young Jamaicans in life skills, the Scout members gain tremendous experience in being civic-minded.