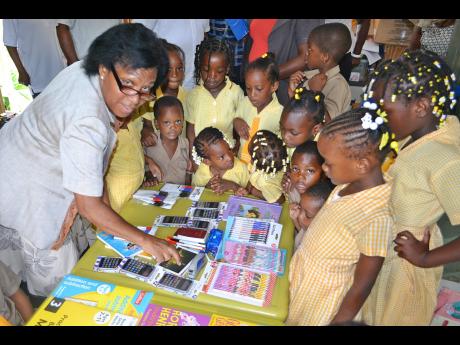 Dulcie Hutchinson of the UK-based charity, Springs of Hope, with students at Windsor basic school, St Ann’s Bay, on Tuesday. 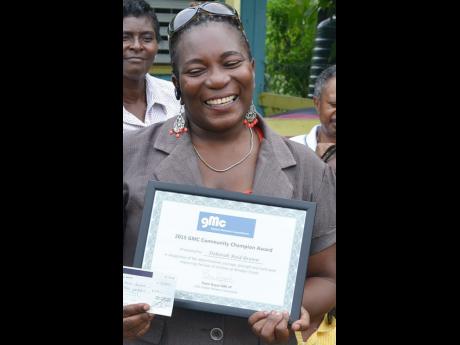 Principal at the Windsor Basic School in St Ann's Bay, Deborah Reid-Brown, has been recognised for the work she has put in at the institution for the last 15 years.

Reid-Brown, who co-founded the school in 2000, was presented with the Global Markets Consultants 2015 Community Champion Award and a certificate of recognition from Springs of Hope, charitable foundations based in the United Kingdom, at a ceremony at the school on Tuesday afternoon.

The awards were presented by Dulcie Hutchinson, founder of Spring of Hope.

In a message read by Joyce Hutchinson, of Spring of Hope, Prem Goyal, chief executive officer of GMC, wrote that, "GMC is committed to making a lasting positive change and supporting communities all over the world. Since 2012 GMC has recognised exceptional people who are unsung heroes in our communities for their long time contribution and selfless dedication to others.

Debra Reid-Brown is one of such unsung heroes. Fifteen years ago, she opened the school offering education to 45 students, with the help of four volunteers. Despite hardships and numerous hurdles, Deborah acted with courage, resilience and selflessness to continue providing education, a human right."

The award was presented "in recognition of her determination, courage, strength and hard work improving the lives of children at Windsor Estate."

The award was accompanied by a cheque for £100.

Another cheque for £300 also came from Pastor Phyllis James of Way Maker Outreach Ministry, while Deacon James of the same ministry, donated several pieces of educational material to the school.

The certificate from Springs of Hope, which was presented to the principal and staff, recognised the outstanding, hard work, dedication and commitment to the school.

In accepting the awards, Reid-Brown, acknowledged the support of her staff over the years, describing them as her motivator. She thanked Springs of Hope and GMC for the recognition.

"I am very humbled by this gesture, I am honoured," she said.

"Humility is the state of not thinking that you're better than others. It's our duty to help the helpless, to love the unloved and to give hope to the hopeless, and that's my duty. That's what I aim to do, that's what I will continue to do and with your motivation, your inspiration, your recognition, I will be able to do so because it shows that I'm not alone in this fight."

Dulcie Hutchinson was accompanied by several members of the Hutchinson family, including Monoleto, Leopold, Joyce and Clinton.

For Hutchinson, it was the second time visiting the school in person. She used the opportunity to appeal to the wider community to assist the school.