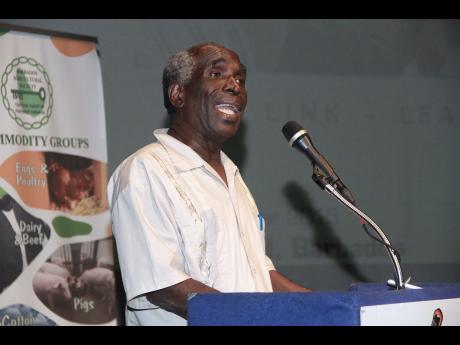 It is time that small-island developing states in the Pacific and Caribbean regions, which have long been tricked into economic underdevelopment by their former colonial masters, awaken and stem the ongoing exploitation of their natural and human resources.

"In the post-independence era, we have sold ourselves short. This is so especially in the Caribbean, where, rather than working together to use our natural resources to build and develop our own economies, we continue to ship these riches in the raw state, under the pretence of preferential trade, to further build the economies of the developed importing countries who, in most cases, were the former colonial masters," he charged on Monday.

Reid, who was delivering the keynote address at the opening session of the first Caribbean Pacific Agri-Food Forum at the University of the West Indies, Cave Hill, charged that events are now showing clearly that the heavy dependence of African, Caribbean and Pacific (ACP) countries on preferential access for agricultural products into Europe has not been to their benefit, contrary to the long-held misconception.

It is now widely accepted by development economists in academia that this preferential trade access into Europe and, to some extent, North American countries, was a major contributor to the continued economic under-development and restricted economic growth of ACP states over the years, the senior civil servant charged.

"This was ably supported by the apparent but false image of a comfort zone that they thought they enjoyed, created by the false impression that the guaranteed access into the markets of Europe and to some extent Canada and the USA, was never-ending. Now that times have changed and the stark reality of the land of the giants and the dwarfs has been revealed, especially with respect to the removal of this preferential comfort zone we thought we had, we suddenly realise that we are in a land where lesser equals must compete with the greater equals to survive," he lamented.

Though late in the day, the recognition and appreciation of the economic path the regions should have taken long ago - deepening of south-south economic cooperation among developing countries - is a good starting point Reid told participants at the forum which runs until Friday, under the theme 'Link, Learn - Transform'.

He challenged farmers, agribusinesses and other stakeholders to make an effort to develop a value-added chain that starts at the primary level of production and ends with the manufacturing of a final exportable product.

This is consistent with the vision of every government in the ACP group to see its country transform from developing-economy to developed-economy status, enjoying sustainable economic growth.

However, the permanent secretary warned that this vision will not be realised if each government in the grouping strives on the premise that it can be done at the country level alone or with handouts from the developed world in the North.

"As developing economies, we cannot and we will not attain a sustainable economic growth path or attain developed-economy status unless we cooperate with each other and learn from each other, and by so doing, increase and develop a shared knowledge and technological capacity that would enable us, if effectively utilised, to transform our economies by building on primary production and developing highly sophisticated value-added production and supply chains."