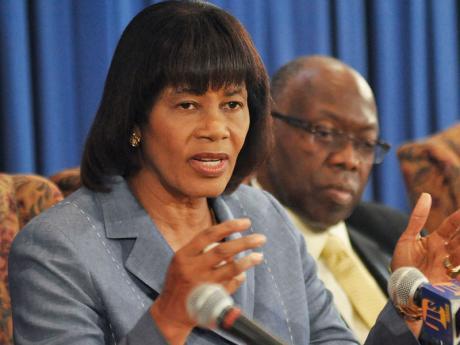 Simpson Miller issued the instruction today following discussions with members of the Partnership for Jamaica National Council at the Office of the Prime Minister.

It was expected that the report would have been released on Sunday after Ferguson makes an address to the nation.

Simpson Miller issued the instruction today following discussions with members of the Partnership for Jamaica National Council at the Office of the Prime Minister.

"It is important to release the audit at this time. There is no attempt on the part of the Government to cover up anything," Simpson Miller is quoted as saying in a release from the Office of the Prime Minister.

The release says the report will be published on the website of the Ministry of Health and will be made available to the media.

Earlier, a Jamaica House statement said, while expressing confidence in Ferguson’s ability to lead the activities of the Health Ministry, the partners contended that there was an issue of perception that needed to be addressed by way of issuing the report sooner than next week as originally planned.

The Office of the Prime Minister has since issued another statement deleting the claim that the partners expressed confidence in Ferguson's ability to lead the activities in the health ministry.

"The Private Sector Organisation of Jamaica has continued to advocate for transparency in all areas as a prerequisite for good governance,"  the new statement quotes PSOJ President William Mahfood as saying.

"The result of today's Partnership Council meeting was to reinforce that, and we are pleased that the honourable Minister of Health has agreed to release the audit tomorrow in a move to improve this trust amongst civil society and the government.”

Minister Ferguson also provided a comprehensive update on the improvements being undertaken in the health sector.