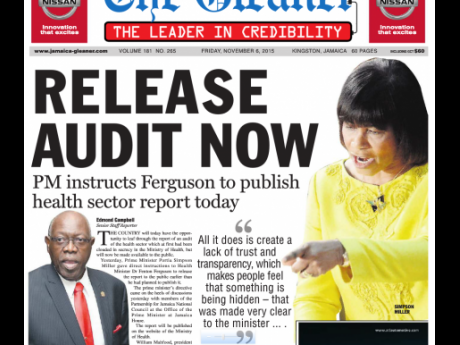 Screen grab from the Gleaner's ePaper

The government has still not released the controversial audit of Jamaica's health facilities.

The Office of the Prime Minister says the report will be published on the website of the Health Ministry and will be made available to the media today.

However, up to midday there was no sign of the report.

The audit is being released earlier than Health Minister Dr Fenton Ferguson wanted following an order by the Prime Minister, Portia Simpson Miller. After much public pressure, Dr Ferguson relented and announced on Tuesday that he would release audit, which has been ready since August.

He did not give a date but The Gleaner/Power 106 News Centre understands that plans were being put in place to release the audit some time after Dr Ferguson gave a national address on Sunday.

Ferguson has said he fears that the public will use the contents of the audit to form a negative view of some health facilities.

However, Simpson Miller overruled him and issued the order yesterday following discussions with members of the Partnership for Jamaica National Council at her office.

In September, Dr Ferguson released eight findings from the audit,  some of which pointed to a breakdown in infection control at hospitals.

However, he came under renewed pressure to release the audit after the Jamaica Labour Party leaked what it said was information from the report suggesting the government knew about the current deadly bacterial outbreak at two hospitals earlier than it reported.

Nineteen babies have died over four months as a result of the infectious outbreaks at neonatal units at the Cornwall Regional Hospital and University Hospital of the West Indies.