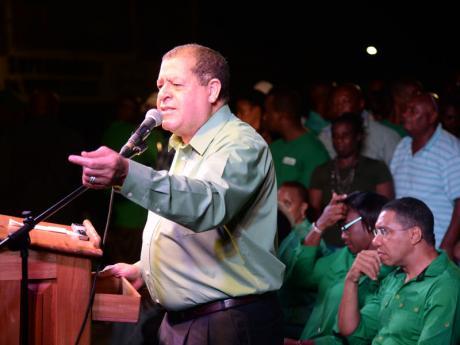 Audley Shaw, the fiery Jamaica Labour Party Spokesman on Finance has acknowledged that he erred last week when he told supporters that a Health Ministry audit team had reported from as far back as August that there was an infectious outbreak in the neonatal unit of the Cornwall Regional Hospital.

"On the day the audit team arrived at Cornwall Regional Hospital there was an infection outbreak in the neonatal unit," said Shaw last week, indicating that he was reading from the leaked audit report which was presented the Health Minister in August.

But the audit, released on Friday, does not support Shaw’s claim.

On Sunday evening, Shaw appeared before Labourites at a mass rally in Spanish Town, St Catherine to say sorry, explaining that he was misinformed. Meanwhile, Shaw has also reacted to criticisms for sending his wife overseas to get medical attention for their premature child.

"Don’t draw me tongue, leave my little preemie out of it,” declared Shaw.

"My wife was at home and heard that she is 22 weeks pregnant when her water broke," he said.

According to Shaw, when she went to a hospital in Jamaica; he was informed by the doctor that his wife would have to abort the baby.

"To God be the glory great things he has done, because I had to do this during the most difficult time when I was Minister," Shaw said.

He said the baby was in an incubator for five months before she could breathe on her own.