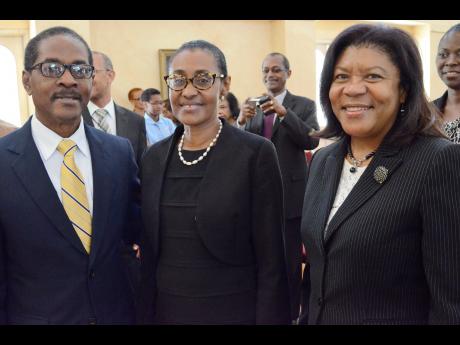 After giving years of service to Jamaica's justice system while serving on the Bench, some retired judges now find themselves broke.

That's according to outgoing president of the Court of Appeal Justice Seymour Panton, who highlighted the impecunious condition of some of the nation's former judges during a Sunday Gleaner interview.

According to Panton, there are some retired judges whose pension can only pay their light bills.

He noted that there were consistent proposals, from as far back as 20 years ago, for the conditions of service and emoluments for retired judges to be indexed somewhat to the salaries of serving judges.

He said the independent commission that deals with the conditions of service and emoluments for judges backed the proposals.

"I personally cannot under-stand why Parliament thought it fit to pass a law that retired prime ministers and governors general should be so favoured but the judges who deal with justice are not so favoured," said Panton.

He noted that the pensions of retired prime ministers and governors general match the salaries of those who are serving, and argued that it is ironic that such an improvement cannot be done for the retired judges.

"This tells what the approach and attitude of Parliament is to the judiciary," said Panton.

Turning to other concerns, the outspoken retired judge said he would not give his view on the Caribbean Court of Justice because there is a debate going on in the Senate.

But Panton added: "I cannot see the reason for any debate and I commend the literate people of Barbados for having led the way with decency, decorum and maturity in setting up their final court."

Panton, who has served for 45 years in the justice system, with the last eight years as president of the Court of Appeal, said he was disappointed that certain improvements were not made to the system during his tenure. He was appointed to the Court of Appeal Bench in November 1999.

According to Panton, he is disappointed that the powers that be did not expand the Court of Appeal to the proper size for it to manage the heavy workload.

He said he had to point out that a minister of justice had responded positively to a request for expansion and the legislation was changed for there to be 13 judges instead of the usual seven, but to this day, the space problem has not been addressed.

Panton noted that although there has been budgetary allocation for three additional judges since 2008, judges cannot be appointed to fill the posts because there is nowhere to put them.

A request for additional judicial clerks to assist the judges was also granted, but the lawyers are all packed in a little room without any window because of the lack of space.

"I had to take that step because I did not want to lose the posts, so the judicial clerks are working under very trying circumstances."

Panton emphasised that additional judges would move the cases much faster, and said he will be very vocal as he supports his successor to ensure that the space is provided.

"A judge of appeal has hardly any life," declared Panton, as he charged that the judges had to work day and night and on weekends because the job entailed a lot of reading, writing and research.

"It is the same number of judges we have since the (Appeal) Court started in 1962, and even a blind person can see that it is ridiculous to be thinking that seven persons can operate properly 50 years later, given the increase in litigation and criminal activity," said Panton.

The retired judge was speaking to our news team last Tuesday on the margins of his send-off ceremony attended by a large gathering comprising members of the judiciary, attorneys-at-law, family members, court staff and friends.

He was hailed for his sterling contribution to regional juris-prudence and for serving with distinction and dedication in the justice system.

Panton was described as brilliant, fearless, helpful, courteous, one who had a great sense of humour and one who never tolerated foolishness.

In his remarks, Panton called on the judges in the Common-wealth to work hard and maintain and guard their integrity while giving justice to all.

"If you do so, you will retire as happy as I do, confident that you have done your best for the cause of justice in the land."

He urged members of the judiciary to do their job "without fear or favour, [dis]affection or ill will".