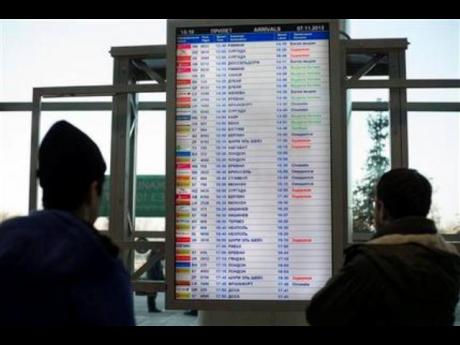 AP photo
People look at an information board with flight arrival times in Domodedovo airport in Moscow, Saturday, Nov. 7. Russia has banned all flights to Egypt until aviation security procedures improve but was allowing special flights to bring Russian tourists back home from Sharm el-Sheikh.

Britain's foreign secretary says airport security in many cities will need to be overhauled if it is confirmed the Russian plane crash in the Sinai was caused by a bomb planted by the Islamic State group or someone inspired by the militants.

Foreign Secretary Philip Hammond warned that if those suspicions are true, there needs to be a rethink of security at airports in areas where the extremist group is active.

U.S. and British officials suspect the Oct. 31 flight from Sharm el-Sheikh to St. Petersburg was brought down by a bomb on board, but Egypt warns it is too early to say what caused the crash.

Mourners have packed into the landmark St. Isaac's Cathedral in St. Petersburg for a memorial service for victims of the Russian plane crash.

As a choir sang, the bell of the world's fourth-largest cathedral was tolling one time for each of the 224 victims. Most of the victims were from St. Petersburg or other areas of northwest Russia.

The Russian airliner crashed Oct. 31, about 20 minutes after taking off from an Egyptian resort area. The British government and U.S. officials have said intelligence suggests the plane was downed by a bomb, but Egypt says there's still no confirmation of what caused the crash.