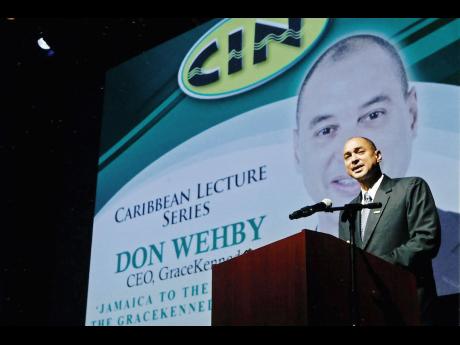 On Thursday, October 29, GraceKennedy Group CEO Don Wehby delivered the 11th Annual CIN Lecture Series at the Schomburg Centre in Harlem, New York. The lecture, titled 'Jamaica to the World, the GraceKennedy Story,' traced the company's roots and gave the attendees a taste of what to expect from the company moving forward.

"As a result of our anaemic economic growth, people still doubt whether or not Jamaican firms can enter international markets and compete effectively with firms there. Today, I will share the story of a Jamaica-born and locally managed corporate entity that has, and is, destroying that perceived myth daily," he said, alluding to GraceKennedy.

Wehby outlined the contribution of the former chairmen and CEOs of GraceKennedy, such as founders Dr John Grace and Fred W. Kennedy, along with accountant James Moss Solomon Snr, Carlton Alexander, A. Rafael Diaz and Douglas Orane, whom he succeeded in 2011.

Among the key areas he addressed were the company's foray into manufacturing in the 1950s, GK in the 1970s, the company's expansion into financial services in the 1990s, and its commitment to nation building and corporate social responsibility. The work of GraceKennedy's foundations in education as a life-changing tool for hundreds of young people was also highlighted.

But it was GraceKennedy's international expansion that was singled out for great detail by Wehby, who described the company's newest subsidiary, GraceKennedy USA LLC as being 'perhaps GraceKennedy's most critical chapter yet'. "Up until this point, there has been a huge missing link to our strategy. We were not doing our own marketing and distribution in the United States as this was being done through a third party. It would have been impossible to meet our goals and objectives without the right strategy in place," he said. He added that GraceKennedy USA LLC will address this, and will be the game changer for the GraceKennedy Group.

The Group CEO shared that GraceKennedy products are now available in Jamaica, the Caribbean, North and Central America, the United Kingdom and wider Europe, Africa and Russia. "We're excited to see where else the journey takes us," he said, adding, "I have shared our story from 1922 to present with you today, but know that exciting chapters are ahead."