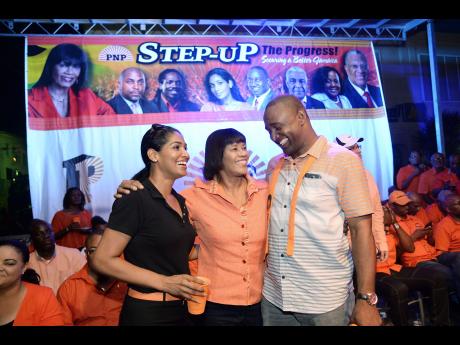 As if he was overcome with Pentecostal fire, North West St Ann Member of Parliament, Dr Dayton Campbell urged critics of the Peoples National Party to recognise that their situation in life is due in part to progressive polices of the party.

Campbell was speaking at a massive PNP meeting in Brown's Town St Ann, the nerve centre of his constituency.

He cited free university education in the 1970s and the Common Entrance Exams as some key development programmes that have helped to move Jamaica forward and said the PNP is still the best vehicle for the country.

Having opened his address with the words from the song "I must have the saviour with me" Campbell quickly went into a sermon.

Campbell said that if for no other reason, he supports the PNP because of the move by Norman Manley to create the Common Entrance exam which made it possible for people to benefit from a secondary education.

"I am a youngster that grew up in the church and when me used to go church over Bamboo New Testament, the church used to sing a song. 'Roll back the curtains of memories ..."

He said people need to be reminded of what the PNP has done and warned voters not to fall for the promises of the JLP.

"I hear dem a talk bout remove auxiliary fees from schools. A did warn dem about removing the user fee from the hospital and free health care."

Along the way, he promised to "lock down North West St Ann".

A first time MP,  in 2011, Campbell won the seat by just over 800 votes beating the JLPs Othneil Lawrence who is expected to be his opponent again."