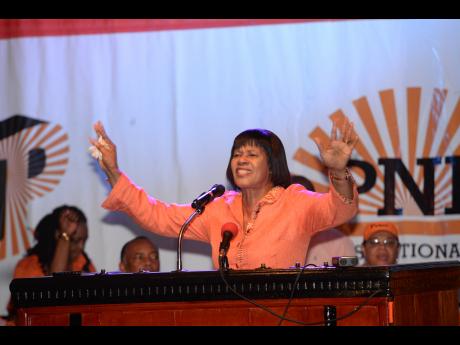 Prime Minister Portia Simpson Miller said the tragedy involving the deaths of newborns at two of the island’s hospitals has served to overshadow the significant work done by the government to improve the health sector and overshadowed much of the hard work done by Dr Fenton Ferguson.

Speaking at a party mass meeting in Brown's Town St Ann on Sunday night, Simpson Miller, who is also president of the PNP, said the government has been making significant investments in the sector.

“Our government invested more money in the health sector. If we have more we would spend more," she said, pointing out, for example, the development of centres of excellence for health care across the island.

She said the deaths of the babies were very painful for her government.

"The experience has been especially hurtful because our administration has done so much over the past four years to reduce the number of deaths of babies and mothers during child's birth," Simpson Miller said.

Some 19 premature babies have died at the University Hospital of the West Indies and Cornwall Regional Hospital since a deadly bacterial outbreak in July.

Dr Ferguson, under whose ministerial watch the deaths took place, has been reassigned to the labour and social security ministry.

Simpson Miller said that Horace Dalley, the new health minister, will be working with health officials to make sure this does not happen again.

"I feel it because all the people around me know how much I love children. They are my heartbeat. They are the future of this country. They should be cared for and protected," a sombre Simpson Miller said.

"No one can be sure if one of those babies would not rise to become the prime minister, minister of government, scientists, educators, farmers …," she said.

"The recent outbreak of bacteria in some hospitals resulted in more deaths of premature babies than is the norm in hospitals in Jamaica and developed countries and has caused many families and our nation great pain," the PNP president said as she explained her decision to reassign Ferguson.

"It is not easy to lose a child, particularly a young baby. It is painful. It is hard. The government feels the pain of the mothers and the fathers who have lost their loved ones. As a government we are sorry for the loss of these precious lives," Simpson Miller said.