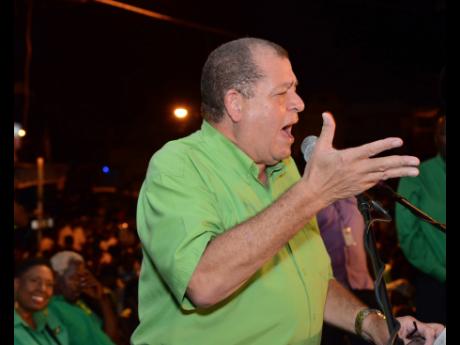 File Photo
Opposition Spokesman on Finance, Audley Shaw says the 100,000 jobs promise is no different from Prime Minister Portia Simpson Miller’s pledge to remove GCT on electricity in the lead up to the 2011 General Elections.

Opposition Spokesman on Finance, Audley Shaw, has described the ruling party’s promise of 100,000 jobs as a desperate election ploy which Jamaicans would have to be living in a fool’s paradise to take comfort from.

The promise of jobs was made last night by finance minister, Dr Peter Phillips, at a People’s National Party rally in Brown’s Town St Ann.

Phillips said the jobs will be created in agriculture, tourism and the business process outsourcing sectors. However, Shaw says the PNP has no credible and compelling basis on which it can promise the creation of 100,000 jobs if returned to office.

He says the promise is no different from Prime Minister Portia Simpson Miller’s pledge to remove GCT on electricity in the lead up to the 2011 General Elections.

"This is a desperate election ploy on the part of a Government feverishly clinging to power and trying to drum up support by manipulating the electorate,” Shaw says.

Shaw argues that it is an empty promise because large-scale job creation is only derived from substantial investment across a broad spectrum of large, medium and small enterprises.

He says this has not been happening because the PNP's economic policies have been contractionary due to burdensome taxation and dollar devaluation which have combined to severely suppress consumer demand and prevent business expansion.

“The consequences of these policies are seen in the outturn for economic growth in the first three full years of this Government with a mere 0.2 per cent average growth from 2012 to 2014. Just above zero growth. This feeble foundation of no growth reveals the absolute and naked impotence of Dr Phillip's barefaced election promise,” he continues.

The opposition spokesman adds that the PNP has not delivered on major investment projects which would have provided some impetus for the creation of jobs.

Meanwhile, Shaw says the performance of the PNP over the past four years does not justify them being returned to power.

He says the country is headed in the wrong direction on many scores, and the vast majority of Jamaicans are worse off than they were four years ago.