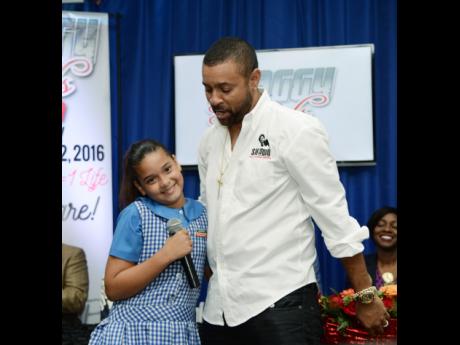 Jermaine Barnaby
Orville 'Shaggy' Burrell (right) was delighted after Simona Saure sang at the launch of the 2016 Shaggy and Friends Concert at the Bustamante Hospital for Children in Kingston yesterday.

For many Jamaicans, September 12 is associated with Hurricane Gilbert, one of the strongest storms to ever hit the island.

However, for Zola Bailey, it was the day her daughter almost died.

Speaking with The Gleaner at the launch of Shaggy and Friends Concert, held yesterday at the Bustamante Hospital for Children in Kingston, Bailey indicated that in 2007, a severe collision occurred between the vehicle she was driving and a trailer.

"I honestly don't remember much - my memory has not been the same since the incident - but I just remember the car slamming into the trailer and my baby had to be rushed to the hospital. She was admitted for four months," she said.

"She suffered serious head injuries, both of my legs were broken, and my face was split in half. It was a traumatic experience."

Bailey told The Gleaner that she now has a better understanding of the importance of giving back to society, especially to the nation's children.

"She could have died, and from the look of things, she shouldn't have lived. It was the hard work of doctors and nurses who worked tirelessly in ensuring that she recovered as soon as possible," she said.

"I am also grateful for contributions such as these because a life is very precious and everybody has to play their part in ensuring that every citizen has an equal chance to life," she continued.

Bailey's daughter, Simona Saure, spoke of the efforts of doctors who continue to work hard to save people's lives.

"I was a patient at this facility, as I was admitted for four months, and it was the hard work of doctors and nurses that made my recovery easier. I want to thank Shaggy for his efforts in giving back to the country because you continue to touch many lives," the 11-year-old said.

Founder of the event, entertainer Orville 'Shaggy' Burrell, noted that everyone should play a part.

"One in every five Jamaicans has had a Bustamante (Children's Hospital) experience. My daughter, up to recently, had an incident and, when all was said and done, she had to be sent to Bustamante, and sometimes we take these things for granted. It nuh matter the controversy and discussions dat taking place, at the end of the day, it all boils down to the children," the international artiste declared.

Senior medical officer at the hospital, Michelle-Ann Richards Dawson, expressed gratitude for the continued contributions, adding that the children should be priority.

"This is not only about the concert, but it is about the impact organisations such as these have been making on our children. Simona is just one of the many children who benefit from the proceeds of the concert. More than 200 children pass through our accident and emergency section daily, and when chikungunya (chik-V) took over, we were seeing some 800 children. The need is great," she said.