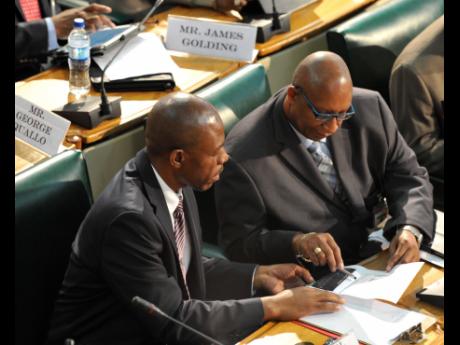 Norman Grindley photo
Commissioner of police Dr Carl Williams (left) and Deputy Commissioner of Police Glenmore Hinds, going over documents minutes before he was questioned by the Parliament’s Internal and External Affairs Committee on the rising crime rate yesterday.

Commissioner of Police, Dr Carl Williams, says the Police are concerned about the growing number of contract killings across the island.

Williams says these paid murderers carry out their heinous activities mainly in St James and the Corporate Area.

According to him, the Police have seen what he describes as a new class of hit men.

He says these hired murderers are carrying out contract killings on behalf of persons seeking to get rid of others with whom they have disagreements.

Speaking at yesterday’s sitting of the Internal and External Affairs Committee of Parliament, the police commissioner said one gang in St James has committed 15 contract killings across three divisions since 2014.

The Committee had invited the police commissioner and his team to make a presentation on what steps are being made by the police to tackle the crime problem.

Williams pointed out that while contract killings are not new, the police have observed a troubling trend with these killings occurring with greater frequency.

The top cop reported that all other categories of crimes had declined in 2015 when compared with 2014, however, murder increased by 22 per cent.