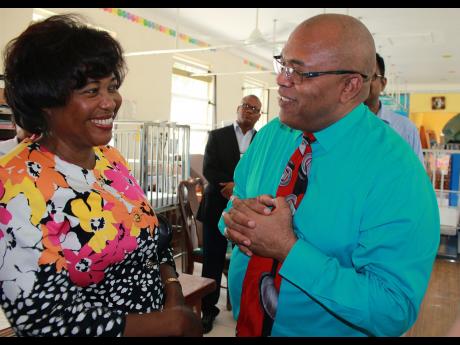 Following a tour of the paediatric department at Annotto Bay Hospital (ABH) in St Mary, Allen praised local hotelier and philanthropist Paul Issa for his work improving hospitals and clinics, and hailed the Issa Trust Foundation (ITF)'s partnership with ABH as a model for success.

Earlier this month, the ITF, which celebrates its 10th anniversary this year, flew in a team of US medical volunteers to deliver a four-day paediatric education programme to ABH staff, and donated equipment, including three incubators, to the hospital's paediatric and maternity wards.

According to Allen, who is an ITF patron, in the two years since the charity launched a prenatal training project throughout St Mary and St Ann, mortality rates in the region have fallen by around 30 per cent.

Speaking to an audience of schoolchildren, health care officials and volunteers, she said: "Here at Annotto Bay, we have seen commitment on the part of the medical team and the ITF. Many people participate, but not many persons are committed.

"As a St Marian, I'm very proud to be back in St Mary and affiliated with the ITF and the ABH. Being on the tour of the paediatric ward and seeing those tiny babies, who will be sitting up and walking in a few months, really brings a warm feeling and a deep appreciation for what the ITF and the medical team here at Annotto Bay are doing."

Senior medical officer Dr Ray Fraser estimates 60 to 70 per cent of the equipment in ABH's Accident and Emergency department was supplied by the ITF, and noted the hospital maintains one of the lowest mortality rates on the island, thanks in large part to the charity's backing.

Similarly, the regional director for the North East Regional Health Authority (NERH), Fabia Lamm, described the support her organisation and staff receive from the ITF as 'tremendous.'

She told Rural Xpress: "Annotto Bay has always been doing par excellence in the treatment of neonates, but with the donation of this critical equipment, we should be able to assist even more.

"The ITF's contribution to the work we do in the nurseries is really significant and will boost the morale of the doctors and nurses who work with these babies."

ITF chairman Paul Issa added: "Throughout the year, we always have two [paediatric] volunteer doctors on rotation in this region. We put them up for a month at Couples Tower Isle, and they go around to the different hospitals and clinics.

"It's a cliche, but children are our future and we are very happy to find a way to give back, especially to the communities we operate in - St Mary, St Ann, Westmorland and Hanover.rural@gleanerjm.com