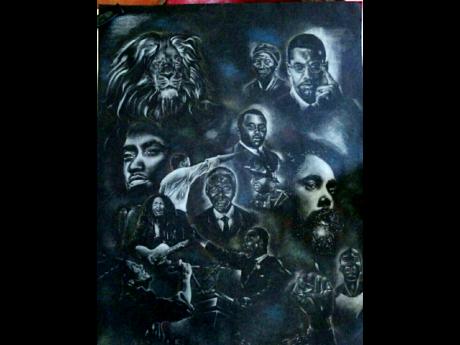 Another piece done by Nyron Surjule. 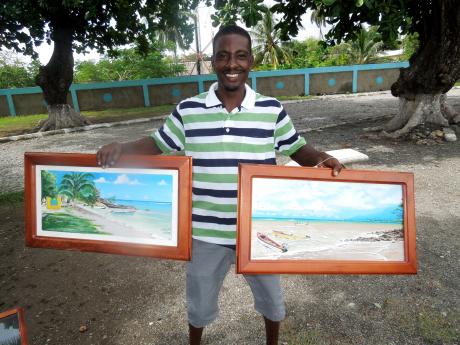 Nyron Surjule is an artist - not because he has sold millions of dollars in artwork or because he went to an art institute to perfect his craft.

Though his pieces are good and continuously receive compliments, the 34-year-old has never sold a piece of art. Neither has he been professionally taught how to put paint to canvas.

"I started drawing when I was seven. [Hurricane] Gilbert had just passed and some zinc was stacked inside my house and I picked up a pencil and began drawing on one of them," Surjule said.

He told Rural Express that he was extremely pleased with the results, so he continued to draw on almost any surface he could reach.

"My schoolbooks were filled with drawings until I started to do portraits, and later, I ventured into painting on canvas," he said.

What pleases him the most is the fact that almost all he knows was self-taught.

"I learnt how to do them at home. I had no formal training. I only did art in high school, but most of my improvement happened after I left school and was home doing nothing," Surjule revealed.

And even though he admits that there are times when he is not in the mood to draw or paint, Surjule says he has a genuine love for art.

"There are times when I get the feeling that if I don't draw something then the day will not go good. I see art as an outlet to express myself because I'm not really a talkative person. Art is my best means of conveying how I feel and the world I see," he said.

"I've never received money for my work and I don't think I'd do it as an occupation because I don't see the demand for it, especially here in St Thomas," he said, revealing that he fishes in order to make a living.

"I tried to sell them once at a craft market in Kingston, but the suggested buying price did not match the work that I put in to get them sorted out and looking presentable, so I took them all home and decorated my house with them. I would become a professional artist if people are willing to pay the right price for my work," he said.

Surjule told Rural Express that he believes he is good at what he does; however, he admits, there is room for improvement.

"I would give myself an eight out of 10. I couldn't give myself full marks because I can look on my work and point out various faults. I'm my biggest critic," he said.

What are the must-haves of an artist?

"I'm not sure about the others, but for me, I have to have a paintbrush and paint, and mentally, I cannot function without patience and perseverance.

"Halfway through the artwork, it may seem as if it isn't working out as planned, but if you stick it out and continue, then you might be surprised where it ends up," he advised.

"Some would say paper or canvases are must-haves. I use to think that you need special material to paint on, but I now realise that you can paint on anything. It could be a shirt, a piece of board or any surface you have. You just have to be creative," Surjule said.