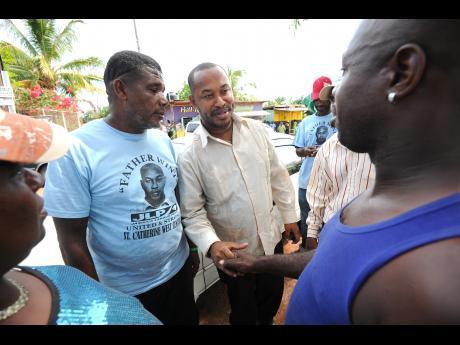 A senior Jamaica Labour party (JLP) source has revealed that Devon Wint has still not been informed he is no longer the party’s candidate for the West Central St Catherine constituency because he cannot be found.

Yesterday, the JLP announced that Wint, who is the councillor for the Point Hill division, was asked to step aside quietly following disturbing allegations against him.

However, Wint reportedly denied the allegations and refused to go quietly.

That is when the party decided to remove him.

However, Wint cannot be located.

The senior JLP source says Wint has been overseas and the leadership of the party has been unable to contact him. In this file photo Devon Wint supporters celebrating his victory in Point Hill.

Wint was absent from the party’s mass rally in Spanish Town on Sunday, where he had not been named among the candidates selected to represent St Catherine constituencies.

The constituency has been plunged into mayhem since former South West St Elizabeth Member of Parliament Dr Christopher Tufton, expressed an interest in the seat.

Several protests, including the burning of JLP T-shirts marred the usually smooth flow of the JLP stronghold that has been held by Dr Ken Baugh for the past three electoral terms as Wint’s supporters rejected Tufton as an outsider.

For some in the JLP, the ousting of Wint serves as a lifeline for Tufton who has been scrambling without success for a seat to represent the party.