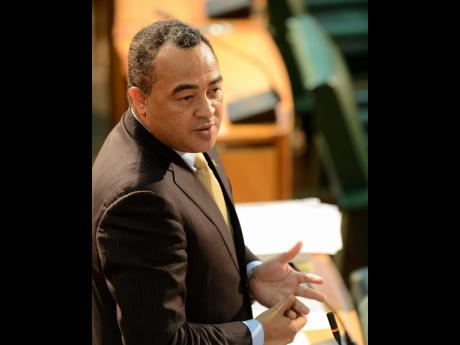 Ian Allen
Making his contribution to the CCJ debate today, Tufton proposed that the vote be delayed for at least one year.

Opposition Senator Dr Christopher Tufton has called for a delay of voting on the three bills to establish the Caribbean Court of Justice (CCJ) as Jamaica's final appellate court.

Making his contribution to the CCJ debate today, Tufton proposed that the vote be delayed for at least one year.

He said with a general election looming, it is impossible that a vote would not be "unduly influenced by partisan advantage".

According to Tufton, the aim should now be to get the support of the public that bipartisan consultation is needed going forward.

The three bills have already been passed in the House of Representatives but the Government needs the support of at least one opposition senator to secure the passage of one of the bills in the Senate.

Tufton said the debate has become partisan and politically polarized adding that while he shares the view that a referendum would serve to politicise the judiciary, utterances made by justice minister Mark Golding and K.D. Knight have betrayed that sentiment.

Tufton told his colleagues that a referendum does not have to be politically decisive saying it is up to political leaders to determine the mood and temperature of such an exercise.

Tufton along with Arthur Williams were returned to the Senate this year after the court ruled as unconstitutional the move by the Opposition Leader Andrew Holness to submit their presigned, undated resignation letters to the Governor General.

The Opposition has maintained that the decision as to whether the CCJ should replace the Privy Council as Jamaica's final court of appeal should be put to the people in a referendum.

Tufton said that both sides are at one on several issues, among them, the need to repatriate sovereignty and to ensure access to justice.

Tufton, however, said there is a lack of clarity on why the Government is seeking to abolish appeals to the Privy Council.

He said too that the Government must convince private investors and potential foreign investors that they will get justice at the CCJ as it would be a fair court which would not be subjected to political interference.