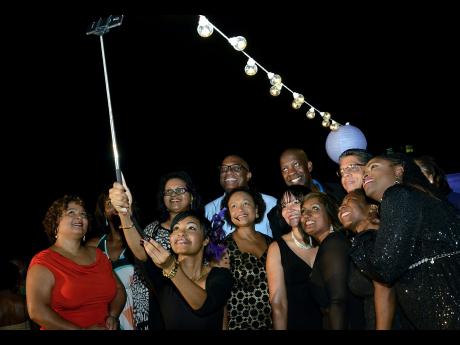 But, in celebrating its 21st anniversary, it is clear that the entity is more than holding its own in the VMBS family. Clients and potential clients were fÍted at a recent anniversary event at the VM Building in New Kingston.

General manager of VM Wealth Devon Barrett said the entity had come of age and noted that they had come through challenging times, namely the financial crisis of 2008.

"And, guess what? We have cleared that hurdle," he said. "So we don't think any other hurdle can stop us."

Barrett championed the various products offered by VM Wealth and was certain that these were providing good returns to customers. He whetted the appetite with the announcement of a new unit-trust fund recently approved by the Financial Services Commission.

While not giving any details, Barrett said the fund would be launched in December and was a continuation of the trend of moving away from repos (repurchase agreements) to unit trusts.

President and CEO of Victoria Mutual Building Society, Richard Powell, said the parent company was very happy about the progress Victoria Mutual Wealth Management had made in recent times. Similar to Barrett, Powell noted the fallout suffered by financial institutions during the financial meltdown. he explained how VMBS and VM Wealth stayed the course.

"We decided to change the business model and to, even in advance of the recent regulatory constraints that are being placed on the REPO business, retool the organisation to make it a full-fledged brokerage," said Powell.

Powell noted, though, that they still offered repo options and stockbroking and that general trading activities were on the increase.

"It has really accounted for a far more robust enterprise so that there has been a real diversification of income streams at the organisation," said Powell.

He noted some of the markers of that success. Up to September 2015, in relation to capital market activities, VM Wealth had raised US$70 million for clients.