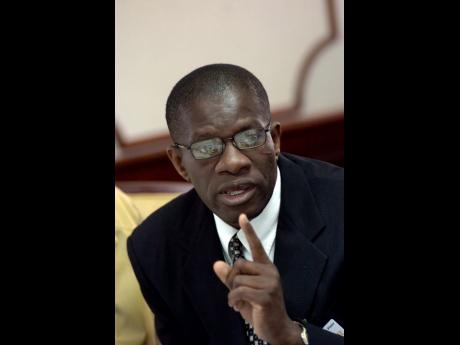 Ricardo Makyn
FILEDr Paul Ivy, author of ‘It All Begins with the May Rains’.

Following a long drought in 1963, there came blessed relief on May 20 with the first drops of rain and so did Dr Paul Ivy's mother's labour pains, with him in the womb.

Fast-track to 2015 and that is now the title of his four-volume autobiography, It All Began With the May Rains.

Ivy, who is now armed with five degrees, chronicles his amazing journey from sometimes going to school barefooted, to failing his common entrance twice, not getting the opportunity to attend one of those 'ivy leagues' high schools but still forging ahead to live his dream.

The former president of College of Agricultural Sciences - a school he once attended - shared with Family and Religion the real catalyst behind writing the book.

It wasn't about an ego trip. in fact, he debated opening up aspects of his life and the lives of his siblings and other relatives to the world at large but said that wanting to motivate others that one's history by no means determine one's destiny won out in the end.

The other driving motivation to write the book was to show how a solid family life - no matter how poor one is - can make a difference in a child's life.

"I grew up in a humble setting - the small, rural district of Ewarton in St Catherine - and in a poor family, but with dedicated parents, whose singular focus was the welfare of my siblings and me," Ivy said of his parents.

Ivy said he credits his accomplishments to the "straitened circumstances in which I grew up, the challenges I faced, and the opportunities and achievements I've had." All these, he said, contributed to a story that needed to be told.

According to Ivy, who is currently the associate professor and associate vice-president for Graduate Studies, Research and Entrepreneurship, at the University of Technology, if there is one thing he wants readers to take away from Volume One of his book, which is now available on Amazon, it is that their history does not in any way determine their destiny.

"At its core, my book is first about the role of dedicated parents. and second, it is about how opportunity, help from well-meaning persons, hard work, ambition, and fixity of purpose led to triumph over poverty," he shared about its contents, adding that the book's focus is to inspire and motivate others.

Writing the autobiography was not an easy feat for Ivy as he described it as an "emotional roller coaster".

There were moments of pleasure as he relived pleasurable experiences and at times it was laborious as he had to juggle competing demands for his time - work and family. then there were the "unpleasant memories", which he had buried in his memories.

"I cried sometimes, especially when I reflected on my parents' sacrifices - refusing to leave my siblings and me to go to Canada with her employers - but, when I got it all out, I felt I had done right by them," he said of his many accomplishments.

Ivy, who was close to his now deceased mother, praises her for the role she played in shaping him to be the man he is today.

"My mother was a domestic helper. She noticed that I loved to read - I was curious, I loved to know things. So she collected all kinds of reading materials from her employers, after they were through with them, of course, and took them for me to read. For example, she collected each week's supply of The Gleaner after her boss had read them and took them home on Fridays for me."

It is this habit, which she nurtured by constantly supplying him with reading materials that he credits as the major factor that contributed to his subsequent academic success.

His father earns his undying love and respect as he said despite encouragement from his father's friends to take them into the field with him (he was a small farmer), he focused on ensuring they stayed in school.

The four-volume autobiography chronicles with interesting memories the various stages of his life from growing up to his accomplishments.

The other three volumes, according to Ivy, will be released on a phased basis beginning next month with Volume Two, with three and four scheduled for the second quarter of next year.