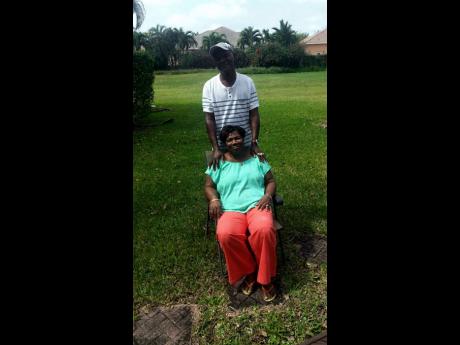 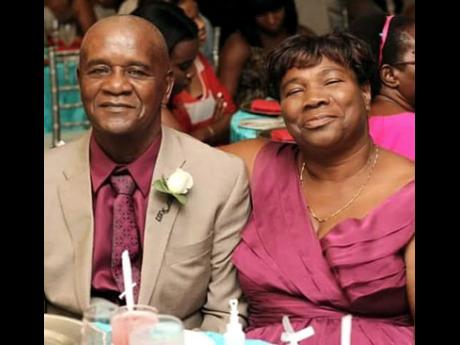 Contributed
Merene and her husband at one of her daughters wedding.
1
2

Only a woman with captivating beauty, wit, and charm could cause a man to relocate from one parish to another without giving it a second thought. But Rapheal Edwards knew what he wanted when he first laid eyes on Merene Edwards, and that was to make her his wife.

Surely, he had to work hard to get her interest, but in the end, collectively, 50 years of togetherness is untradeable in the love books.

"His (Rapheal's) sister and I were good friends and I spent time with her occasionally. He came there once and he saw me, and after living in Kingston for so many years, he decided to move down to Mandeville."

Persistence was the order of the day, as day in, day out, Rapheal sought after the woman who allowed him to experience love at first sight.

"He tried and tried and tried, but me really never interested. When me realise him nah ease up, I said, 'Ok, you know what, let me give him a chance'," laughed Merene.

After being together for 10 years, it was time to make it official.

"He came to me one day and said 'I want to get married' so I asked him, 'to who?' and him give me a look and say 'nuh must you'. Knowing how him persistent, he wouldn't take no for an answer and so we got married."

Yes, the declaration Rapheal made to Merene that he was going to be her future husband came to pass and Merene's 'not in my lifetime' response had no hold.

With the union producing six children, five of whom are married, the Edwards have found the greatest reasons for marital success to be understanding, respect, and love.

"Merene is just a wonderful woman and because of the type of woman she is - one of principle and morals - I have to treat her right. I could not let her go because I knew I probably would not get another woman like her."

no relationship without disagreement

Adding that there is no relationship without disagreement, Merene admitted that it takes sacrifice to be accommodating of another's personality.

"To be honest, my husband has never done anything that annoys me to the point of leaving. No sah! I tell my children all the while that teeth and tongue will meet, but it is what you do after to make things right. The two of you can make it work if you try and keep friends out of your relationship and, instead, put God in the centre of it."

She continued, "It is important to make each other happy too. My husband love him food and I make sure he has his hot meal every day. If I will be out for the day, I make sure and cook before me leave. It's just one of those things you must do."

The Edwards believe that for so many of the broken relationships, a simple solution of faithfulness and respect for each other can mend pieces.

"Many times you hear of relationships ending because the man or woman is unfaithful, or the woman over spending money and is showing no respect. But faithfulness is key and, really, women should just try not to be too much of a spender. My husband trust me with the money because he knows I'm responsible. Remember, at the end of the day, you two should be working together for better."