It won't be long, Portia tells Comrades as election fever heats up Portmore 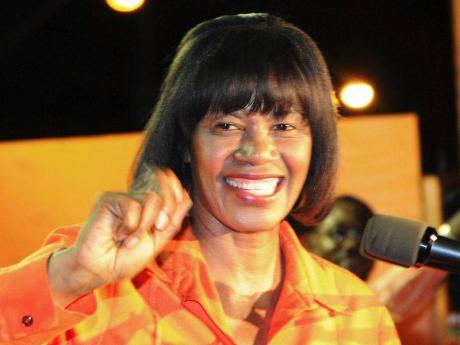 Addressing a massive crowd in Independence City, Simpson Miller said that the journey to economic independence may be long but quickly told them "I am not saying that the election campaign will be long."

Under the Representation of the People Act at least 21 days must elapse from the announcement of an election to the holding of the polls.

"I hear everybody guessing whether I am going to call elections or not. You will be appropriately informed when my master touches me and say 'My daughter go now'," Simpson Miller said.

Earlier, the PNP president whipped up the Portmore crowd in Independence City, when she likened her warm-up rallies across the island to horse racing.

She said she was weighing the jockey and checking the bridle and the saddle in an effort to ensure that everything is going to be OK when she announces the election.

"I hear some people saying that I should make up my mind and call the election. They forget that we are a democratic party and as the people's party we have a duty to hear from them," Simpson Miller said. Citing the JLP's campaign song 'Roll Call', Simpson Miller said she has made the call and Portmore has answered by the thousands.

"Talk about roll call, I am giving a proper roll call tonight, not a fool fool roll call," the PNP president said.

She listed many communities in Portmore and said that the PNP has transformed the area from vast swamp lands to a major municipality.

"I know that there are some remaining challenges that need to be address," she said even while boasting of several infrastructure and social transformation projects that have been made.