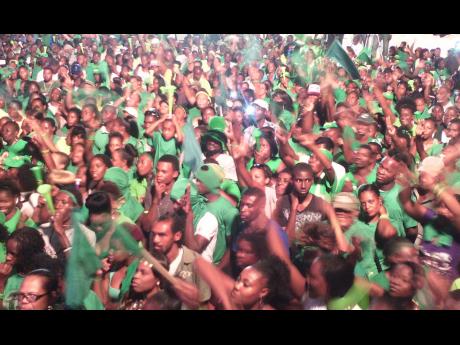 It has been an untidy situation as traffic attempt to trundle through a crowded Alexandria square in South West St Ann where the Jamaica Labour Party (JLP) is holding its mass meeting.

From the political platform, JLP stalwart Desmond McKenzie called for the police to divert the traffic from the Alexandria square.

"I want to make an appeal to the police to divert the traffic, and this has to be done by 7:15," McKenzie demanded at 6:41 p.m. Sunday evening.

He told the police that they had a job to do and so too does the JLP.

Traffic problems aside, Labourites responded to the taunting by the governing People’s National Party (PNP) declaring that South West St Ann, a traditional green zone, is venturing to reclaim its former glory.

Although a decades-long deadlocked has been broken by the (PNP) twice, including 2011, for many Labourites, South West St Ann is still like the stronghold that Gideon Aabuthnott Gallimore won in 1959, beating A.S. Wilmot of the PNP by 600 votes.