A good day for Annotto Bay Hospital: Facility to get perimeter fencing 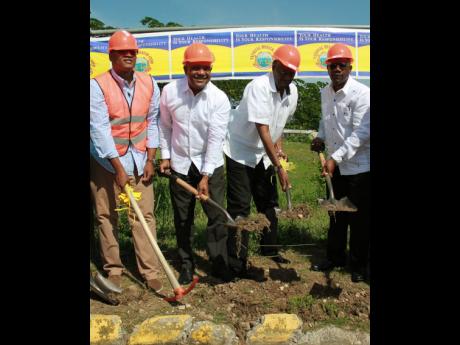 In September, dozens of medics protested after a masked gunman crept on to the hospital compound and robbed a nurse of her smartphone. The health workers called for the construction of a security wall and better lighting on the roadway leading up to the hospital.

Later that week, Dr Fenton Ferguson promised to construct a perimeter fence, and according to senior medical officer Dr Ray Fraser, staff at the hospital are very grateful the former health minister's successor is committed to completing the project.

Fraser told Rural Xpress: "This perimeter fence is very important for several reasons, but mainly because it gives the staff a sense of security to know the government's administration is listening to their concerns, and responding in a timely way.

"It's unfortunate that we have to spend so much money constructing a fence to keep off a few invaders because since I've been here, overall, the community has been very supportive of the hospital. Those intruders don't represent the community.

"When we are in a crisis, [the local community members] are what I call 'the first respondents' because they see the hospital as defending their interests. However, the fence can only do good, and I really appreciate government's quick response".

Speaking after a contract signing and ground-breaking ceremony hosted by the North East Regional Health Authority and the National Health Fund, Dalley said: "The fence is just one thing because people have to take personal care, security precautions and so on.

"But to get the fence is a big improvement because for years they have wanted this facility fenced. I'm happy to be here and share in this, but it is a good day for the ABH staff.

"When I became minister of health on April 1, 2006, this was the first hospital I visited to come and see my friend Dr Fraser. I like ABH because I know this facility offers excellent service, is managed well, and has the dedication of the staff to improve and continue to deliver good health service to the people of this area."

He added: "Through the little time I spent at the Ministry of Health, one year and five months, I have come to know a lot about that department. But also being at the Ministry of Finance and Planning since January 2012 has given me a very good insight of the operations, challenges, and difficulties."