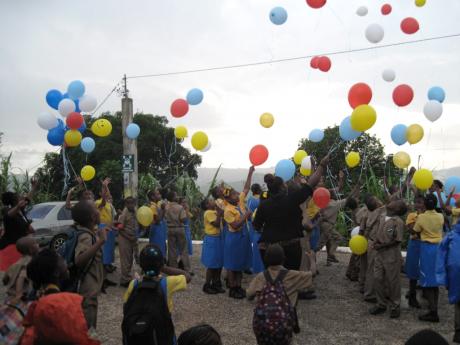 The Moravia Primary School, Clarendon is floating twice as high as the hill atop which the school is perched, having achieved 100 per cent mastery in the 2015 Grade Four Literacy and Numeracy tests.

Beverly Smith Williams, principal, along with her team at the Moravia Primary School in Clarendon, held a prize-giving ceremony to award the 35 students for their hard work which eventually brought them success.

"It is the first in the over-40-year history of the school that we have had a 100 per cent pass in both literacy and numeracy, and we are very happy about it. We are also highlighting the top boy and girl in each class, as well as the most improved students in each class because they have worked very hard," she told Rural Xpress.

Thirty-two students took the exams in grade four. There were also three boys in grade five who could not read when they started, so they were placed in a special pull-out programme, where three teachers volunteered to work with each student individually. Soon, they were brought up to an acceptable standard, and they, too, did the exams and achieved mastery, these students are currently preparing for GSAT (Grade Six Achievement Test). The small rural-area school has a total of 189 registered students, with 43 currently in grade six.

Marion Mills, the grade four teacher in charge of preparing students for the tests, beamed with pride as she described how proud she is of her students because she has worked tirelessly with them.

"When they come to grade four, we do what is called a pre-test, where we analyse the data and see where the weaknesses are. During teaching, we identify those students with the specific weaknesses and we place more emphasis on those students in areas where they are weakest," she explained.

"Extra lessons are held in the evenings for every student, and because we have some students who learn faster than some, they help with the slower ones, so we focus on the weaker ones. Not only do we want to get 100 per cent in all areas, but we want to know that everybody is achieving mastery and is passing all the subjects" stated Mills.

The classes are decked with teaching aids, such as fraction dominoes and flashcards, which have helped to make the teaching-learning process easier.

An overjoyed Smith Williams and teachers, along with the celebrated students, released dozens of balloons after a heavy downpour of rain into the overcast skies as they closed out the celebrations of the prize-giving held at the school last week.