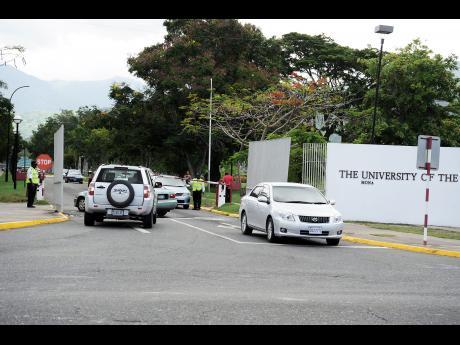 File Photo
Students who live on halls of residence at the campus have indicated that they have been without water in the main pipes since August.

The management of the University of the West Indies (UWI) has described as unfortunate a suggestion by the National Water Commission (NWC) that the water problems on the Campus are solely due to internal issues.

Students who live on halls of residence at the campus have indicated that they have been without water in the main pipes since August.

The NWC's corporate communications manager, Charles Buchanan, has said the issues relate to internal water distribution which falls under the responsibility of the university's administration.

But in a statement yesterday the UWI said despite the improvement in the inflows from NWC’s system, the commission has informed the Campus that their systems are not yet back to full operation.

It says the NWC has also informed that the Hope Filter Plant, which supplies the Campus, is shut down at night.

The UWI says this overall restriction in the supply mainly affects the northern sections of the campus which are at a higher elevation.

The UWI also says the water pressure to the campus is below the level stipulated by the Office of Utilities Regulations (OUR).

The university’s administration says there are also days when there is no water in the mains.

The UWI says given these fluctuations in pressure, it is clear that the NWC’s supply of water to the Campus is inconsistent, and that the delivery pressure is not in compliance with the OUR guidelines.