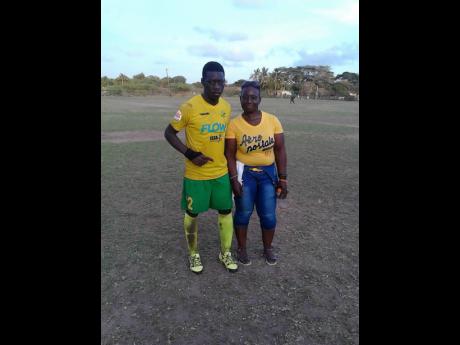 Mother and son. Sherly Spencer, along with her 16-year-old son Daniel Chambers. 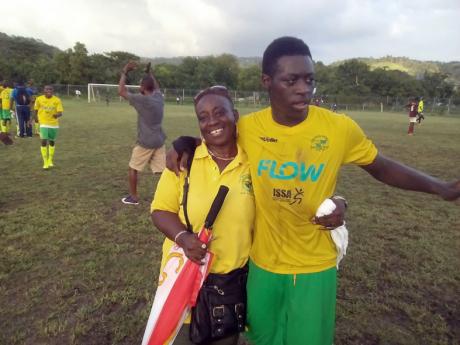 When Sheryl Spencer watches a match involving Vere Technical High School, her main focus is on 16-year-old Daniel Chambers, who is part of the school's football team.

She speaks with pride about his prowess on the field, and each achievement is even more special for her because of the many sacrifices she has had to make to ensure he stays in school.

The single mother of four (three now living on their own) is pushing ahead, wanting to see her 'wash belly' go on to better things.

Spencer's dream is to see her son moving on to college when he finishes high school.

For now, that's a dream on the horizon as she must still meet his day-to-day needs and is still seeking employment or an overseas job opportunity so she can properly prepare for his future.

It has not been an easy road for the single mother as she has been unlucky in love, but still determined to do right by her children.

In an interview with Family and Religion, Spencer said her life took a downward spiral when her mother died soon after she gave birth to her second child.

"I had to stay with my child's father. It was rough. My first child was living with my brother. I was living in Kingston at the time and my son was in Clarendon, so I was back and forth with my daughter," she explained to Family and Religion.

Thinking she had found the stability she needed in a new romance and believing this would be the relationship that would last, she got pregnant for him, only to have her dreams crushed when the relationship went sour.

Dejected and broken-hearted she returned to her home in Clarendon, pregnant with her daughter, to live with her two brothers and her other two

"It was a rough task as, in my pregnant state, I would go around looking day's work. In between that, I raised chickens and also worked in a garment factory," said Spencer.

For her, there was no sacrifice too hard to ensure her children had food on the table and clothes on their backs.

With no support from their father, she was vulnerable to another love interest.

Desperate to find stability and a father figure for her children, she again decided to take a chance at love in 1999.

After she got pregnant, they got married the same year.

They bought a house in Mineral Heights and started attending church.

Spencer could not be happier as she thought she finally found someone who could help shoulder the parenting job and give her the emotional and financial support she needed.

Since 2005, Spencer has been shouldering the burden with her four children.

She got a break when she went to work in the Cayman Islands in 2006, returning three years later.

"From that time, I have been struggling," she said. Luckily, she now only has her teenage son's needs to cater to as her three older children now live on their own and have started their own families.

"My son will be doing eight Caribbean Examination Council examinations and he is studying architecture. He is doing pretty well at school," she said.

Spencer said she has instilled several values in all of her children they should be well mannered, attend church, stay out of trouble, and not keep too many friends."

With faith in God and a confidence borne from all the struggles she has had to overcome, Spencer said she is looking forward to getting a job or even some help to start a business so she can plan ahead for her son's education.