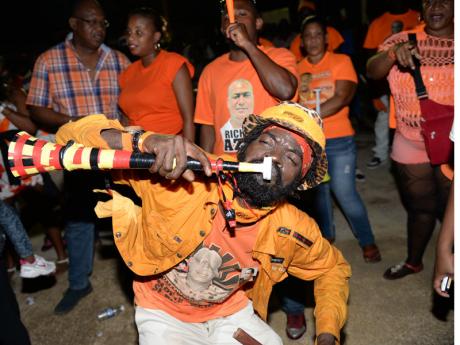 In a major signal to Comrades in South West St Elizabeth, two feuding members of the People's National Party (PNP) on Sunday evening hinted that the wounds are being healed.

Ewan Stephenson and MP Hugh Buchanan held hands high on a PNP platform at a mass rally in the St Elizabeth capital, weeks after a major rift in the constituency.

PNP stalwart K.D. Knight took both men to the front of the stage and all three held hands aloft in a show of unity.

Stephenson this year challenged Buchanan for the leadership of the constituency but fell short by 14 votes.

Despite surviving, Buchanan has been under pressure from factions aligned to Stephenson, a division which party members fear could cost them the seat which was won by a mere 13 votes in the 2011 general election.

Stephenson is the brother in law of the Jamaica Labour Party's Dr Christopher Tufton, the man who Buchanan toppled in 2011 to make it to Parliament for the first time.