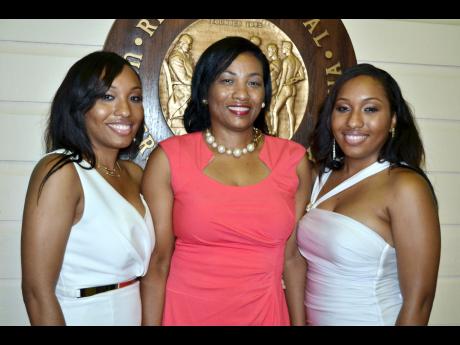 Gaunette Sinclair-Maragh (centre), PhD and head of the School of Hospitality and Tourism Management at the University of Technology, with her twin daughters Dr Krystle Maragh (left) and Dr Kimberly Maragh. 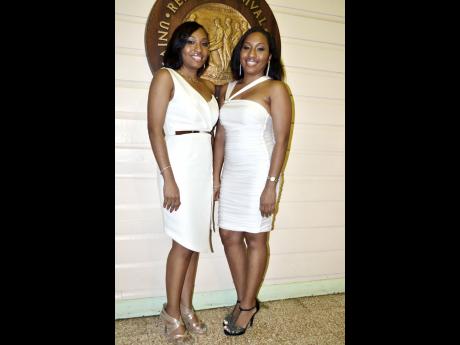 Drs Krystle (left) and Kimberly Maragh, twins who received their bachelor of medicine and bachelor of surgery degrees on October 31 from the University of the West Indies. 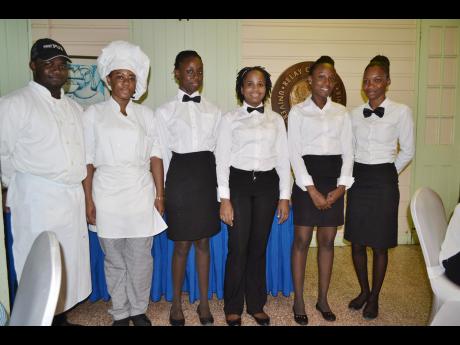 The pleasant and courteous team who served guests at the dinner held at Lillian’s Restaurant.
1
2
3

Gaunett Sinclair-Maragh is a very happy woman. And rightly so. Her twin daughters Krystle and Kimberly Maragh now hold bachelor of medicine and surgery degrees from the University of the West Indies Faculty of Medicine. And just last year, Sinclair-Maragh received her PhD in business administration, hospitality and tourism management.

To celebrate their achievements, a host of family and friends from Jamaica and overseas gathered at Lillian's Restaurant at the University of Technology for dinner and reminiscences about the journey of the twins, whose roots go back to Vere in Clarendon.

Both graduates of Glenmuir High School in Clarendon, the Maragh twins wanted to be doctors from they were infants. Their mother told The Gleaner, "They always wanted to be doctors and even their toys were related to medicine; they played 'doctor' using their toys as 'patients' and even wrote 'prescriptions' for them," Sinclair-Maragh said. So fixated were the girls that they never even considered any second options, and as they grew older, Dr Charles Robertson in May Pen became their mentor.

In preparation, Krystle and Kimberly got excellent grades for mathematics, physics, chemistry and biology in their CXC and CAPE examinations. But they were also in an encouraging environment as their mother was also pursuing advanced studies and received her PhD last year. And along the climb up the academic ladder, her girls helped to type her papers from they were eight years old.

Like typical identical twins, they can complete each other's sentences, but they don't like the same foods. Kristle likes seafood and pasta, while Kimberly likes sweets; and the days of wearing identical outfits are long gone.

"We want to open our own medical practice in Clarendon when the time comes," Kristle told The Gleaner, a decision that is unusual considering most young people would head for bright city lights. Like their mother, who travels into the capital daily for her job as head of the School of Hospitality and Tourism Management at the University of Technology, the twins say they can always come into Kingston for movies or fun activities on the weekend.

Having done a rotation at the May Pen Hospital, Kimberly said they enjoyed its good work environment. Both are now doing their internship at the hospital. Asked what they would like to see changed in the health sector, Kristle said they think every patient in the public health sector should pay a standard fee to cover medicines that can be expensive as hospitals don't always have funds to restock their supplies.

"I would like to see more staff hired because patient load can be challenging, the Government needs to do something about the doctor-patient ratio. If more opportunities were here for medical practitioners, they would remain - training is very expensive," Kimberly noted.

Sinclair-Maragh is proud, happy and relieved. She told The Gleaner the journey was not easy but it is now over. "Education is important to me. Like Nelson Mandela, I believe that we can overstep the barriers of poverty through education." This sentiment was reinforced by her father who always encouraged them to read everything.

It was also a night for toasts, and there were many. Drs Kimberly and Kristle Maragh were described as beautiful on the inside and outside, bright, bubbly, gracious, polite, studious, passionate about work, always smiling, dedicated, exceeding expectations and having the desire to give back even at such a young age, by those who toasted them.

In their response to the toasts, the twins described med school as a "rough ride that was achieved with the help of family and friends and a support system of persons who have continued to be there for us. We are glad to have touched so many lives, thanks for the encouraging words and thanks to our village of family and friends."