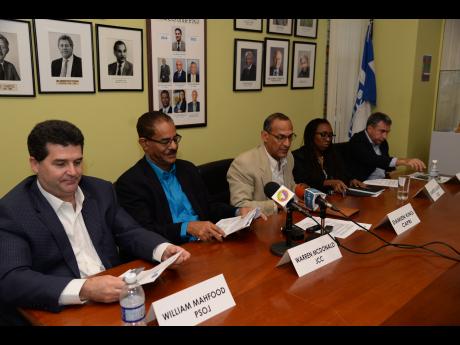 Major national stakeholders have written to the leaders of the two major political parties seeking commitment for five major items going into the next elections.

The stakeholders comprising business leadership, academia and civil society said the commitments will go a far way in assuring all Jamaicans that sacrifices that have been made will not be in vain.

"We are sick to death of the tribal politics costing us what we don't have," Metry Seaga, the president of the Jamaica Manufacturing Association (JMA) said.

The five items for which commitment is being sought are: Fiscal responsibility; price stability; social safety net; public/private sector partnerships and the ease of doing business.

Dr Damien King, co-executive director of the Caribbean Policy Research Institute, said the none inclusion of issues such as tax reform and public sector reform does not mean that those issues are not important.

The comments were made at a joint press conference hosted by the, Jamaica Chamber of Commerce, Jamaica Manufacturers Association and Civil Society  at the PSOJ’s Offices today.

"The country and people of Jamaica have made many sacrifices under the current IMF agreement, and our economic reform programme, which we all believe could be one of the last opportunities for Jamaica to change our economic misfortune and finally see development," the letter to Prime Minister Portia Simpson Miller and opposition Leader Andrew Holness said.