Luke Fearon: A man of the soil 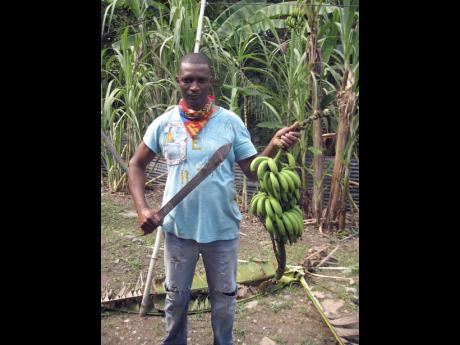 Shanique Samuels
Luke Fearon holds a bunch of banana he reaped from his farm.

Luke Fearon is one of more than 7,000 Jamaicans who benefit from the seasonal farm-work programme. For him, each time he departs, it is a rough time away from his family and the comfort of his home.

"Working in the cold is nothing normal. I have to do long hours and the work is probably 10 times harder than any work I've done in Jamaica. I have to be on my feet most of the time in their fast-paced environment which seems to operate round the clock," he told Rural Xpress. Fearon works on a large Irish potato farm in Canada for up to eight months at a time.

He says he was inspired by his father to become a farmer. Growing up, Fearon said he would miss several days of school because he had to go to the 'field', which is a farm, usually some distance from home, with his father. "My daddy was a farmer all his life, I never see him do any other job or work for people to feed his family. He always had a vineyard in our yard and anywhere there was a little dirt, he would plant a crop or two. Every year he always made sure we had gungo and sorrel for our Christmas."

Fearon said that when his mother prepared dinner most of the food would come from his father's farm, and that made his dad a pleased man.

He said his dad also reared livestock and he and his siblings had the sometimes daunting task of tending to them. "My father didn't have a lot of land so we had to herd the cattle on lands where they could graze. One day we tied the cows on the other side of our land and it rained, and the river that separated the lands overflowed its banks, and it was one hell with me and my younger brother to get the animals home."

Out of his love for farming, the single father of two still does small-scale farming in the off season. He said he still needs to feed his family and school his children, and just sitting at home will not provide for them.

"My two boys are my pride and joy, and I will continue to work to ensure they pass the worst. Right now they are in high school and it's my dream to see them through." He plants bananas, plantains and cane and other small catch crops wherever he finds the space. Although he has not been spared the wrath of praedial larcenists, Fearon says he will not be daunted. "I will not give up, I will continue to grow what I eat and eat what I grow."