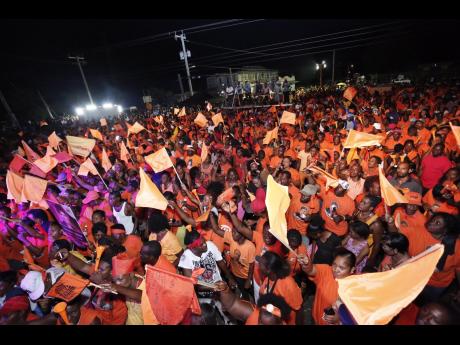 The once safe Jamaica Labour Party (JLP) seat of South East Clarendon could fall into the column of the People's National Party (PNP) for the third time in its history.

Patricia Duncan Sutherland has taken aim at the JLP incumbent Rudyard Spencer who enters the upcoming general election contest with the third lowest margin of victory ever recorded in the constituency – 107 votes.

"The last time the MP got away from (Derrick) Lambert but him caah  get weh from Patricia," said Denise Daley, chairman for the PNP Region Four, which covers St Catherine and Clarendon.

Despite PNP president, Prime Minister Portia Simpson telling the country there wound be no election this year, the party has taken its series of mass meeting to Race Course in South West Clarendon where hundreds of supporters are gathered.

Only Peter Bunting, who beat former Prime Minister Hugh Shearer  by 1,443 votes in 1993 and Basil Burrell who won in 1997 have been successful on a PNP ticket since the constituency was created in 1959.

Before that, when most of it formed Southern Clarendon, it was the domain of Jamaica Labour Party founder, the late Alexander Bustamante.

Bunting stayed for only one term as MP, and his PNP successor, Basil Burrell, won by only 54 votes in 1997.

The next time he faced the voters Burrell was kicked out by Spencer who has so far won three terms.

Arnaldo Brown, MP for the battle ground seat of East Central St Catherine, said he has no doubt Duncan Sutherland will be elected.

"I have a message for Ruddy Spencer. Comrade Duncan Sutherland is going to retire him. It is time to pack you bags and go," said Brown.

" I understand that Comrade Sutherland is making arrangements with some funeral homes to take Ruddy Spencer after the election," he said.