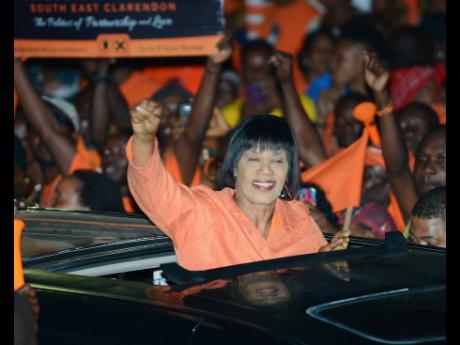 Prime Minister Portia Simpson Miller has dismissed suggestions that her decision not to hold elections this year is a change in her plans.

On Sunday, Simpson Miller, who is also president of the ruling People’s National Party (PNP) announced that there would be no election this year.

Her announcement came amid speculation that her recent parish rallies were geared at mobilising her party’s base for national poll’s to be held before year end.

Speaking in Racecourse, Clarendon, last night, the Prime Minister acknowledged she had said the PNP’s annual conference in September would be the last before an election and that she had told party supporters to organise themselves.

She also said she had told voters she would be visiting them in their constituencies and parishes, but she said her actions were misinterpreted.

General elections are constitutionally due at the end of next year.

Meanwhile, Simpson Miller has sent a message to the Jamaica Labour Party that the PNP intends to add two more Clarendon constituencies to its tally whenever elections are called.

In the last election the two parties won an equal share of the six Clarendon constituencies.

However, Simpson Miller said the JLP now only has a chance of winning the Central Clarendon constituency, where Mike Henry is the Member of Parliament.

President of the PNP and Prime Minister, Portia Simpson Miller.