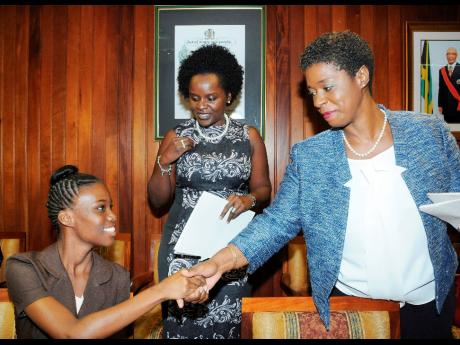 Corporate support is necessary to help the Ministry of Education to meet its target of providing 100 scholarships in mathematics and science education to students at teacher-training institutions across the country.

With about 70 mathematics and science teachers having left the country for the United Kingdom this year, Education Minister Ronald Thwaites says new teachers have to be trained to replace them.

Thwaites called for companies to assist this drive. He was speaking at the presentation of a scholarship by Jamaica National Building Society (JNBS) to Shadae Nicely, a first-year student at the Mico University College.

"This is an invitation to other entities to engage in similar acts of sponsorship," the minister stated. "This is of singular importance to the future of Jamaica."

The country's economic progress requires it to have an educated population, the minister pointed out. One weakness in attaining this progress, however, has been a deficiency in the provision of education in mathematics and the sciences, which showed up in examination results and the "phobia" many have for these subjects.

"We have got away with it in times past, and I think we are suffering from that deficit," Thwaites said.

He pointed out that it would benefit the private sector to have a population versed in math and the sciences; therefore, it was in their interest to support the training of educators in these areas.

She said: "We need more engineers, scientists, and techies, who will lead the idea culture in Jamaica and drive innovation."

Asserted Rattray: "Of the 20 fastest growing careers, 15 of them require a background in math or science. People competent in math earn at least 15 per cent more than others... and those who are competent in both math and the arts are positioned to earn even more."

The education director also explained that it was against this background that the Jamaica National Building Society, through its Foundation, was awarding a scholarship to Nicely to pursue her course in mathematics.

"I was delighted to learn of your passion, commitment and determination to succeed," Rattray told the Mico scholarship recipient. "Yours will be the challenge to unlock the minds of students who have been turned off the subject and who do not believe they are capable of mastering it."

Nicely, a 19-year-old student, responded "I really want to make an impact on math education. I did not like math until a teacher made me see the subject in a different light."

That teacher, whom she encountered less than two years ago, "made me see maths as fun", Nicely added.

"I want to share that with my students," she said.

With approximately 50 scholarships having been awarded to trainee math and science teachers so far, Thwaites said, "Shadae, you are being invited, along with as close to 100 others as we can muster, to lead in that new education thrust".