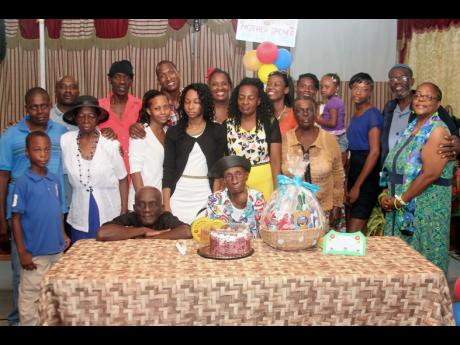 Richard Morais
Centenarian Mrs Elsie Smith-Spence of Falmouth (seated in hat) along with other relatives at her birthday celebration at the Falmouth Holiness Church on Saturday.

It was a humbling experience for the scores who attended the hundredth birthday celebration of Mrs Elsie Smith-Spence of Falmouth, who dedicated most of her life to the spreading of the gospel primarily in children's church school ministry.

The function was held at the Falmouth Holiness Church on Saturday. Among the many tributes that were paid to the honouree was one about her commitment to God in her children's Christian outreach ministry. Her many relatives and friends gathered to celebrate with this woman of God.

Going back to over 60 years, Mrs Smith-Spence started and ran Sunday schools, now known as church school. While she was always linked to a church, her ministry was autonomous, in that she sought out suitable locations in the town and kept these Christian gatherings for the children.

From her small income as a household helper, she was likened to the modern-day version of the feeding of the 5,000 with five loaves and two fish as many attested that they would never leave her house without getting something to eat. Her grater-cake, among other baked items, were treasured nibbles, and children used to go home with her offsprings, not necessarily for the camaraderie, but for the pastries.

Her present caregiver, granddaughter Mrs Mauline 'Cherry' Brown, said she was both a comfort for her during childhood and a support during adulthood. She said that before she started living with her because of an injury, she would stay with her for lengthy periods of time, and it was like therapy.

Septon 'Bruce' Walters, one of the sons of the centenarian, said they grew up poor, but were rich in love and care. He thanked his niece for caring for his mother as the care she needed physically, he could not offer.

Mrs Smith-Spence suffered a fall and broke her hip bone eight years ago and, as a result of this, is now confined to a wheelchair. Apart from the physical impairment and a hearing impediment, she is fully coherent and is a repository of history for those who hold a conversation with her. The minister of her church, Pastor Huntley Webster, spoke of her greatness in calling her a mother of the church.

She came to Falmouth as a 19-year-old girl and started her Christian journey at the William Knibb Memorial Baptist Church. After a number of years, she transferred her ministry to her present church.

She has four children, the others being Seymour 'Bannie' Moncrieff, Esmin Johnson, and Frederica Palmer (more popularly known as Beauty, deceased).