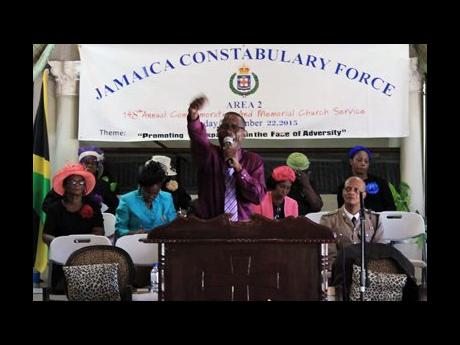 The Reverend Norman Johnson preaches at the New Testament Church of God in Oracabessa, St Mary. 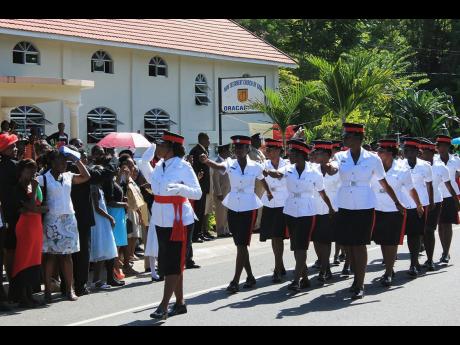 Orantes Moore
Police personnel from Area 2 march outside the New Testament Church of God in Oracabessa, St Mary, as part of their 148th Annual Commemorative and Memorial Service.
1
2

Earlier this week, the New Testament Church of God in Oracabessa, St Mary, hosted the 148th Annual Commemorative and Memorial Service on behalf of the Area Two Police, under the theme: 'Promoting Transparency in the Face of Adversity'.

The event, which culminated with a march by uniformed officers stationed throughout St Mary, Portland and St Ann, featured sermons from several ministers, including local pastor, Norman Johnson, who described the theme as both apt and timely.

He told Family and Religion: "I think the theme is very good and fitting. Of course, we believe that if a reputable [police] force is going to continue to thrive, they will have to first trust God.

"Secondly, they cannot make it on their own. There has to be unity among the force's rank and file members; and thirdly, there's a need for integrity. We are living in an age where every institution is affected seriously and negatively, and have to understand the same things that affect the outside the world, affect us too.

"We have to understand the meaning of our positions and where we are placed, and this is very important because we have been placed here to lead, and leaders should be influential."

Johnson is originally from Kingston, but has been ministering in Oracabessa for the past four years. He believes that many people living in St Mary are insecure about their place and role in society.

He said: "Wherever you are and whatever you're doing, if you are going to be effective, you must know your identity. I think there is an identity crisis and, as a result of that, many people are unable to see life from the perspective of how things really are.

"When you have an identity of yourself, you are better able to put things in their proper perspective. I think people need to believe in themselves. There are cultural issues, and culture is one of the things that drives society.

"Cultural issues are affecting people in negative ways, but we need to identify and understand the positives. When we can do these things, I think we will be more effective in our pursuits."

To offset the negative effects of the identity crisis, Johnson said St Mary parishioners must look within and focus on personal development. He said: "There's a song that says you can't change a man from the outside; the change has to come from within, and I think that's true.

"When we start looking within ourselves, we will be find answers for the situations that are going on in the world around us. When you change yourself, you're helping to change your family, society and the country. Everything starts from the home. That's where everybody lives, so that is where changes need to be made."