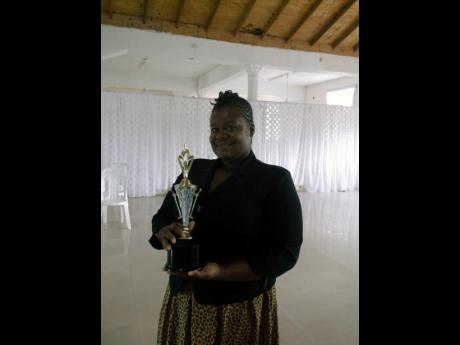 Held at the Bridge Palm Hotel, the Clarendon branch of the SDC singled out individuals who gave of self.

Even as Reid embraced the award, many who knew her story cheered on as it was an acknowledgement that she had made a complete turn where her life is concerned.

Leaving Holy Childhood High School, Reid did not get the subjects she needed, so she ended up enrolling at an institution to complete her studies.

Reid soon attached herself to the wrong company.

For a while, she lost her way, but thanks to her mentor who saw her potential and introduced her to the National Youth Service, where her life began to transform.

It was one that Reid resisted though. She told Family and Religion, "There was one specific facilitator (Miss Shimhue) that each session I had with her made me want to push. It was like I was always creating a barrier to stop progression, but each personal development session would motivate me to excel," she recalled.

It was during that time she said her outlook on life started to improve.

"It was then that I decided I wanted to get involved in my community to help other young people who needed motivation or guidance to see the world as I was now seeing it as an inspired individual," she said.

The continued violence in the community soon saw the Citizens Security and Justice Programme (CSJP) intervention programme being implemented there. With it came an opportunity for Reid to be enrolled at the Hazard Skills Training Centre, where she did food preparation.

"They paid all fees and provided a stipend. The opportunity provided through CSJP, due to my involvement in voluntarism and youth development, was encouraging, which lead me to wanting to do more to further develop myself to help other people," she shared.

Two years ago, following an upsurge of violence in her community, she could not follow up with her community meetings and added to that, she had become a young mother - giving birth to her daughter.

Reid said that did not dampen her spirit and she was just as determined and even more concerned for young girls.

She said it gave her that extra push she needed to move forward, "to become a model mom for my daughter's sake and also for any young girl that was faced with a similar situation".

Last year, Reid started volunteering with a newly formed group - Voices for Jamaica Today Foundations Limited, which was operating on a national level and needed representatives with strong leadership skills to serve in each parish.

She started as an "ordinary member", but, after completing an assigned project, the board was so impressed, they appointed her leader for the Clarendon subgroup.

As leader, she coordinates the various outreach and fund-raising activities in the parish, which ultimately goes back into helping those who need it the most.

After receiving her award from the SDC, Reid said it has further motivated her to continue being an agent of change.

"It has shown me that there is a real task at hand, one in which the need for more individuals to be a positive influence on the lives of our young Jamaicans," she said.

Volunteering and being a good role model has not come without its challenges, but, for Reid, the need of others have far outweighed her own needs and that, she said, is the driving force behind her service.

In times when the load feels too heavy, Reid thinks about her mother, who she credits as being her inspiration, as she has always been there for her children. She is now mother to two beautiful girls. Her ultimate dream is to be employed in the field of youth development and to some day have her own business.