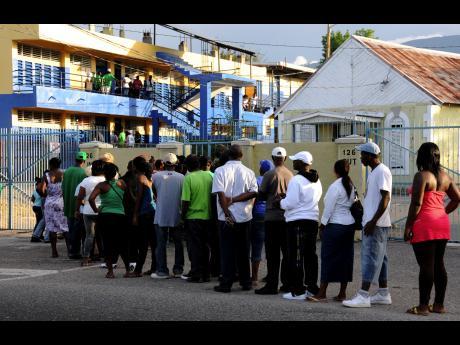 Jamaicans waiting to vote on election day in 2011.

Both major political parties kept the momentum going on the campaign trail for a sixth week even though the country's prime minister, whose sole prerogative it is to determine the date, has declared that there will be no elections this year.

The governing People's National Party (PNP) and its supporters are now gathering in Morant Bay, St Thomas, where they will be holding a mass meeting in the parish capital to shore up support. The PNP's meeting follows demonstrations in the constituency last week over poor road conditions.

The capital lies in the constituency of the embattled former health minister, now the minister of labour and social security, Dr Fenton Feguson. He is also a vice president of the party.

Meanwhile, the JLP is rallying supporters in Richmond, St Mary in an effort to wrestle the seat from the PNP's Member of Parliament for South East St Mary,  Dr Winston Green.

Opposition Leader Andrew Holness will deliver the main presentation at this evening's rally.