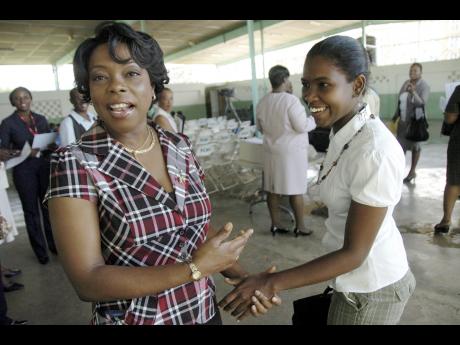 Ricardo Makyn
In this 2010 photo, Deputy Commissioner of Police Novelette Grant greets Natoya Williams, public relations officer for the Tivoli Gardens Community Development Committee, prior to the start of a domestic violence intervention workshop at the Denham Town Community Centre in west Kingston.

For almost 15 years, the Jamaica Constabulary Force (JCF) has had an on-and-off gender and domestic violence prevention project.

The project, dubbed the 'Domestic, Sexual & Gender-Based Violence Prevention Programme', has suffered from a lack of resources over the years, but Deputy Commissioner of Police Novelette Grant believes it has huge potential.

According to Grant, based on its anecdotal impact, the programme should be extended and carefully measured as a pilot to identify what approach can work best in Jamaica.

Throughout its duration, the programme has facilitated trainers and front-line responders such as police, students and residents on solutions to prevent violence in their communities.

"We have persons who we have trained as far back as the early 2000s who still say that this is the approach that works for us ... you get that kind of feedback but it lacked the systematic measurement of impact, and that was a part of the weaknesses in this programme," said Grant.

According to Grant, the root cause of the problem facing the country is that Jamaicans are quick to resort to violence.

However, she argued that many Jamaicans are open to, once they have been shown alternatives, approach situations in a more productive way.

"It is always the kind of resistance you get in the morning of the first day where people (come) with their biases and their prejudices, especially from males, and by the end of day two, people have made the change. So people are always needing more," said Grant.

The senior cop charged that going forward it is critical to ensure greater coordination of stakeholders, such as what is being attempted under the Ministry of National Security's Unite For Change initiative.

Grant added that there is need for a greater focus on prevention rather than calls for stiffer penalties.

"What about those in society who seem to believe that it's okay for young girls to have (sexual) relationships with older men? I was in one of the parishes recently and both a superintendent and a school principal said to me that there seemed to be a degree of acceptance among community members that this was okay.

"Law enforcement alone won't prevent that; stiffer penalties won't prevent that; what you need to do is to start to educate people around these issues - that they are wrong, how they impact the development of children, and why we should arrest predators," said Grant.

According to Grant, since the police have been educating community members about abuse, they have started to receive reports from members of the public going back almost one year.

Grant noted that many parents are unaware of other measures, instead of resorting to abuse to discipline their children.

She said this was noted in sessions where persons were asked to discuss methods of punishment.

"The youngsters were in that room, too, and when I got their feedback, they don't want that kind of approach. So here are parents, who have good intentions towards their children, using the wrong tactics and the wrong tools.

"Here are youngsters who are probably not skilled to give the feedback or they're not being listened to by parents to say 'hey, this is alienating us', because right in that room you could feel the alienation.

"So it tells you that prevention can be systematic if we put information out there and then start to give people ideas of how they can come together to change some of the things that need to be changed, especially around the exploitation of women and girls," said Grant.

Unleash our potential - youth advocate
Taking the church to the streets - The Street Pastors initiative, born in Jamaica, grown in the United Kingdom, and now back a yard
‘Build back’ to stop crime - Grassroots groups could be the catalysts to end violence
Parenting lessons needed - ‘Bad parents’ hurting youngsters in poor communities