Lost in lock-up! - Families not told as inmates are shifted from station to station 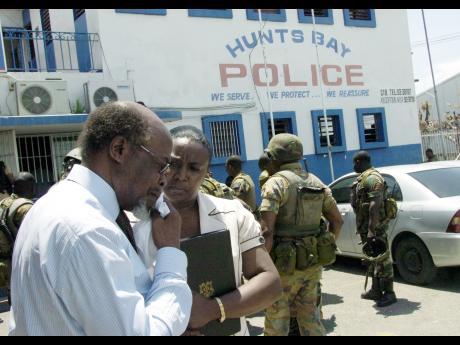 Norman Grindley
In this 2010 photo, then Public Defender Earl Witter (left) spoke with Jacqueline Green, then deputy superintendent of police at the Hunts Bay Police Station in St Andrew. Witter was at the station to get a first-hand look at the condition of the lock-up having found one detainee with rotting flesh at the Greater Portmore police lock-up.

For almost two weeks Marva Brown* went from police station to police station in the Corporate Area in search of her son who had been arrested on a gun charge.

"Them hold him near Half-Way Tree and me hear that me must go Half-Way Police Station, but when me go there two days later them say nobody name so not there, me must check Hunts Bay," Brown told The Sunday Gleaner.

"When me go Hunts Bay them say him not there, and so me go from station to station until me finally find him a Central about two weeks later when him borrow an inmate phone and call me," added Brown whose story is similar to several others whose family members have been deliberately 'lost' in lock-ups by agents of the state who want to "teach them a lesson".

Defence attorney Bert Samuels has seen several of these cases, and has taken issue with the handling of records at police lock-ups, which he says allows persons in custody to be transferred haphazardly until they are lost among the thousands behind bars.

"There is a culture in the police force that treats young men in particular as cargo. They (the police) do not feel that the families of persons have an interest in where their relatives are," said Samuels.

"This is extremely dangerous because we have had cases where persons have gone missing while in police custody. It demonstrates that the Jamaica Constabulary Force operates on a class basis where people are herded up together and put away," added Samuels.

He noted that sometimes messy transfer practices by the police make life hellish for relatives who turn up at the police stations seeking information on their incarcerated loved ones.

"If I am arrested in Constant Spring and I have another case in St James, there is no obligation on the part of the police to contact my relatives to say that I am here or I am there," said Samuels.

"By law a justice of the peace is supposed to visit the jail once per week and check on the persons in custody. There should also be a station logbook. That does help to reduce the problem, but does not put an obligation on the police to inform persons where their relative is."

According to Samuels, the practice makes room for corruption, violation of citizens' rights, and feeds a general slowing down of the justice system.

The attorney charged that several of his clients have been affected and the Government should make it an obligation for the police to inform relatives of the location of persons transferred from one lock-up to the next.

Fellow attorney Ernie Smith, charged that the haphazard treatment of persons in police lock-ups reflects the sloppy administration at the stations.

"It happens from time to time. The problem, of course, is really an administrative failure on the part of the police," charged Smith.

"The chief executive officer is the policeman in charge of the station whether that is a superintendent, inspector or sergeant. They should know that they have a man in custody, and must make enquiries as to when his court date is."

According to Smith it is usually people who suffer from mental challenges who are lost in the police lock-ups. He said these persons often have problems identifying themselves and are seldom visited by relatives.

Director of Public Prosecution Paula Llewellyn is also aware of cases where persons are lost in the system, but she argued that this would happen to fewer than two per cent of inmates in police lock-ups based on the measures put in place.

"You have a situation which is not properly resourced. It is not the police who take money out of their pockets to establish a lock-up," Llewellyn told The Sunday Gleaner.

"You think it is only the health system having problems? All the systems: the administration of justice system, and the police system have problems. It is because you have a lot of committed individuals who try to think outside the box and try to make do with what they have," added Llewellyn.

But Senior Superintendent of Police Anthony Castell, who heads the Trelawny Division said while persons may have been lost in the system years ago, conventional practices within the police force have made this less likely.

"I personally have never had that experience. And I don't know which commanding officer would allow that to happen because these are not the times where we can do that," said Castell.

"If that even happened, it must be many years ago, but definitely not now with so many checks and balances, and with the new management and systems that have been put in place.

"The only way that could happen is if the person gives a fictitious name or if that person does not answer to his name every time his name is called up for court, and both of those are unlikely," added Castell as he rejected the claim that members of the police force may be intentionally transferring persons from one lock-up to the next in a bid to get rid of them.

He said that there are several points of reference for a divisional commander if an attorney makes such a claim about a client. These include the station diary, the lock-up and cell records.